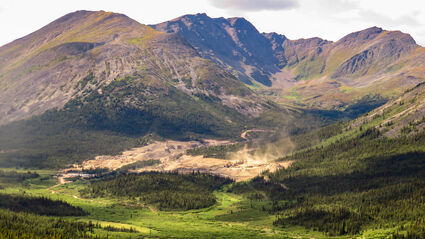 Placer gold mining continues on Granite Creek in the Yukon. While prospecting on the eastern side of Granite Creek, Strategic Metals geologists collected a rock sample containing 75 oz/t gold and 19 oz/t silver.

Strategic Metals Ltd. Aug. 21 reported a rock sample averaging 2,340 grams per metric ton (75.23 ounces per metric ton) gold and 597 g/t (19.2 oz/t) silver that was collected during this year's exploration at Mount Hinton, a property that covers an extensive system of high-grade gold- and silver-rich quartz veins and breccias in the southern portion of the Keno Hill District of central Yukon.

A three-phase program being carried out this year at Mount Hinton is following up on promising gold identified during 2018 sampling.

The first phase of the 2019 program expanded soil sample coverage and initiated prospecting focused on a 3,500- by up to 1,500-meter gold-in-soil anomaly on the eastern side of the placer gold producing Granite Creek, where little to no rock sampling had previously been done.

While collecting rock samples during this initial phase, geologists discovered a linear train of vein quartz and brecciated vein, extending 230 meter northeast from the talus (a pile of rocks that have accumulated at the base of a steep slope) sample that assayed 2,340 g/t gold and 597 g/t silver to an outcrop of altered and oxidized breccia grading 33.3 g/t (1.07 oz/t) gold and 654 g/t (21 oz/t) silver.

During phase-two geologists discovered visible gold within vein quartz float in the area where the multi-ounce gold sample was collected earlier in the season. 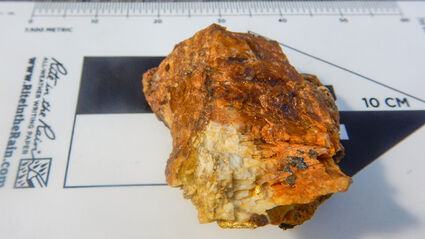 This sample containing abundant visible gold was collected during the second phase of exploration at Mount Hinton. Assays are pending for this gold-rich sample.

Large blocks and finer talus of vein material mixed with oxidized brecciated vein quartz were also found in several, nearby linear structures. Sporadic outcrops of mineralized, breccia and vein quartz show that these structures strike northeast and dip steeply southeast, suggesting the mineralized talus is close to its bedrock source.

Mapping and prospecting during phase-two also discovered numerous other mineralized veins elsewhere within the Granite Creek drainage. The largest of these veins is up to two meters wide and is intermittently exposed for 75 meters along strike, along the western side of the Granite Creek basin.

Assays from the phase two sampling are pending.

A third phase of the 2019 program – expected to begin later this month and continue to freeze-up – is slated to include excavator trenching, road construction, mapping and prospecting.

Strategic Metals is a Yukon-focused project generator with a portfolio of more than 130 projects accumulated over five decades.