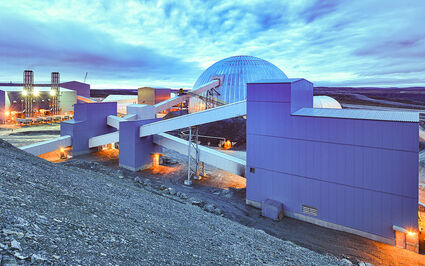 This mill facility, which has recovered nearly 3.5 million ounces of gold from ore mined at Meadowbank, is expected to recover another 2.5 million oz from ore trucked down from the Amaruq satellite project.

For the second time in 2019, Agnico Eagle Mines Ltd. announced reaching commercial production at a new Nunavut gold mine – this time at Amaruq, a satellite deposit about 50 kilometers (31 miles) northwest of the Meadowbank mine and mill in the territory's Kivalliq District.

Meadowbank was Agnico Eagle's first mine in Nunavut and has served as the foundation for the company's growing presence in the territory. Since 2010, this mine has produced nearly 3.5 million ounces of gold. Now, the 11,000-metric-ton-per-day mill is expected to churn out another 2.5 million oz of gold from ore trucked down from Amaruq over the next six years.

This initial mine life is based on the 24.9 million metric tons of proven and probable reserves averaging 3.59 g/t (2.9 million oz) gold identified so far at Amaruq.

Considering the additional gold resources identified at Amaruq and the success of recent drilling there, it is expected that the life of this satellite deposit will extend well beyond 2025.

The Meadowbank mill began processing Amaruq ore from low-grade stockpiles in August. During the third quarter, the mill produced 48,869 oz of gold, which included 13,588 oz from Meadowbank ore and 35,281 oz of pre-commercial gold.

Agnico had forecast that Amaruq would contribute 40,000 oz of pre-commercial gold during the third quarter. Heavy rainfall this summer, however, slowed the dewatering of the Whale Tail mining area, which in turn delayed access to the ore there.

Though it took about a month longer than expected, Agnico said the dewatering is now essentially complete.

With ore deliveries running behind schedule, the company saw an opening to carry out some maintenance to the mill and other equipment at Meadowbank that was scheduled for next year.

As a result, the mill was shut down for about a month starting in mid-September. In the meantime, Amaruq ore continues to be mined and trucked to Meadowbank in anticipation of the expected Oct. 14 restart of the mill.

Once the revamped mill is back in action, it will be processing ore from commercial production at Amaruq, which began on Sept. 30.

"Congratulations to all of our employees at Amaruq for achieving commercial production in line with the original schedule despite ongoing challenges related to dewatering and adverse weather conditions in the second and third quarters of 2019," said Agnico Eagle Mines CEO Sean Boyd. "We would also like to thank the various government agencies and the local communities for their continued support in Nunavut." 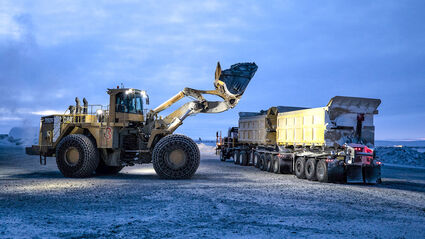 A bulk sample of Amaruq ore is being loaded into a truck bound for Agnico Eagle's Meadowbank Mine, where it was processed in the mill ahead of commercial production from the satellite gold deposit.

Due to the shutdown, Agnico now anticipates that the Meadowbank mill will produce 200,000 oz of gold from Meadowbank and Amaruq ore during 2019, which is down nearly 15 percent from the original guidance of 230,000 oz for the year.

Despite the lower forecast for the Meadowbank Complex, the company' 2019 gold production guidance across all of its mines remains unchanged at 1.75 million oz.

With both of its Nunavut mines producing gold, Agnico anticipates it can begin to reap the rewards of the investments it has made in expanding its gold producing platform in the territory.

"With the start of production at both Amaruq and Meliadine in 2019, the company is well positioned to deliver on its goal of generating net free cash flow in the second half of this year. This is expected to allow us to reduce net debt and potentially increase the dividend while continuing to steadily grow our business," said Boyd.