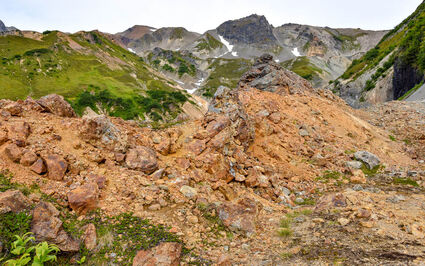 Oxidized gold-silver-copper-zinc-lead mineralization on the surface at the JT deposit on HighGold Mining's Johnson Tract property in Southcentral Alaska.

"Johnson Tract is one of an elite few gold deposits to generate drill intersections in excess of 100 meters of greater than 10 grams per tonne (metric ton) gold," commented HighGold Mining President and CEO Darwin Green. "What makes the mineralization even more impressive is the occurrence of high-grade copper and zinc along with the gold."

When you calculate the grade times the thickness, which provides a means of comparing different styles and grades of mineralization, the intercept at JT19-082 comes to 2,107 gram-meters gold-equivalent, making it one of the industry's best drill intersections reported this year.

The JT deposit at Johnson Tract has long been known to host rich gold-silver-copper-zinc-lead mineralization.

Westmin Resources Ltd. continued the exploration at Johnson Tract in the 1990s with the idea of shipping ore from the near coast property to mill facilities at its Premier Mine in northwestern British Columbia.

The new hole cut both wider mineralization and higher grades than its historical twin, which is good news for validation of the past drilling and calculating a resource that complies to modern reporting standards. 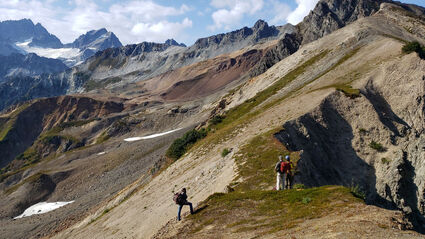 HighGold crews carry out prospecting, mapping and sampling during a late-summer program on the Johnson Tract property about 125 miles southwest of Anchorage, Alaska.

Constantine Metal Resources Ltd., which spun Johnson Tract and other gold properties into HighGold earlier this year, said resampling of core from the past drilling on the property returned grades and widths that strongly correlate with the assay results that formed the basis of the historical resource calculation.

In total, HighGold completed 2,247 meters of drilling in nine holes at Johnson Tract this year. The company plans to use the new drill data in combination with the validated historic drill data to generate an initial NI 43-101-compliant mineral resource for the JT deposit.