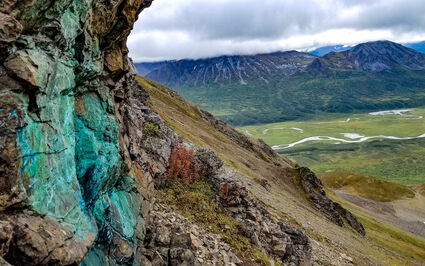 PolarX Ltd. Nov. 18 reported that the first hole drilled at Mars has indeed tapped a wide section of copper-gold-molybdenum mineralization, confirming the porphyry potential of this target on the Australia-based explorer's Alaska Range property.

The copper-gold-molybdenum mineralization is associated with gypsum alteration indicating an association with highly oxidized fluids. PolarX said this is important because highly oxidized systems have the potential for higher copper and gold grades.

The company also believes this hole was not drilled into the hottest core of the porphyry system at Mars, where the highest grades are often found, due to the lack of pervasive potassic alteration in the mineralized intersections encountered.

"The alteration minerals indicate that this hole is not the best part of the system but may be close," said Tabeart. "When coupled with the size and nature of the surface geochemical and geophysical anomalies, the assays confirm our view that a very large mineralized system may be present."

Infill soil and rock chip sampling carried out by PolarX in 2018 outlined a 2,000- by 1,500-meter area of anomalous copper, gold, molybdenum and arsenic mineralization previously identified with broadly spaced sampling at Mars.

These anomalies are co‐incident with a chargeability high anomaly defined by an induced polarization (IP) geophysical survey.

19MAR001, the first and only hole drilled so far into this porphyry, cut porphyry-style veins from about six meters below the surface to the end of the hole at 417 meters. The intensity of this mineralization increased with depth, with the most noticeable increases from 321 meters to the end of the hole.

The 102-meter mineralized intercept was near the bottom of the hole, which was terminated at 417 meters due to difficult drilling and heavy snows bringing an end to the 2019 exploration season at Alaska Range.

Earlier this year, Lundin entered into a strategic partnership to explore the porphyry potential at Stellar, part of PolarX' larger Alaska Range project.

Mars occurs at the western end of a 7.5-mile‐ (12 kilometers) long mineralized corridor that also hosts the Saturn porphyry target at its eastern end.

Saturn was tested with five holes completed earlier this year. These holes, however, did not tap the porphyry mineralization PolarX and Lundin were targeting there. 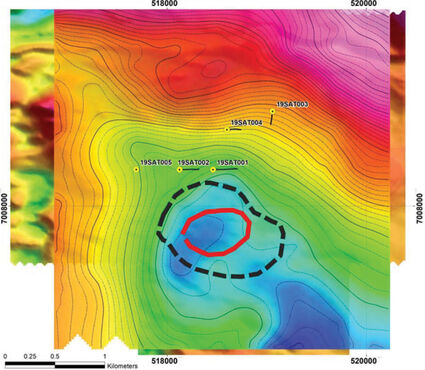 This map from the 2019 gravity survey at Saturn shows a large gravity low coincident with a magnetic high (circled in red) just south of the holes drilled this year at this porphyry target.

A gravity survey completed late this year identified a significant gravity low immediate south of the drilling that coincides with a prominent magnetic high within the broader Saturn target. This, along with the geology observed in the drill core, suggests that the porphyry system at Saturn lies just south of the 2019 drilling.

"The recently acquired gravity data at Saturn highlights a large target immediately south of our drilling," said Tabeart. "The alteration zoning and geology in the Saturn drill holes again support our view that the gravity anomaly represents an intrusive (porphyry?) center, which also requires further drilling to complete our first pass evaluation."

CORRECTION: The previous version of the article stated that hole 19MAR001, cut 102.1 meters averaging 0.07 percent gold. The intercept is actually 0.7 grams per metric ton gold. We apologize for the incorrect information.