Pembridge takes in $1M a week from Minto 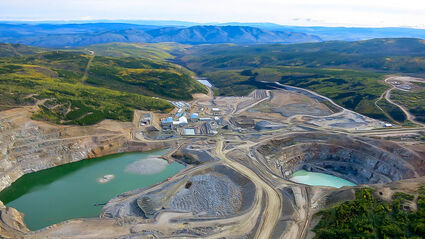 Pembridge Resources produced more than 3,500 copper concentrates at Minto since it resumed operations at its newly acquired Yukon mine in early October.

Pembridge Resources plc Dec. 4 announced that its revenue from the restart of operations at the Minto copper mine in the Yukon now exceeds US$7 million.

United Kingdom-based Pembridge, which finalized a deal in June to acquire Minto from Capstone Mining Corp., resumed operations at the mine in October.

To ensure steady revenue from Minto, the new mine owner entered into an offtake agreement with Sumitomo Corp. for the copper concentrates produced there.

Under this agreement, Pembridge is to receive an advanced payment for at least 55,000 metric tons of copper concentrate produced by the Minto mine between now and the end of 2020.

Sumitomo will make this advanced payment in monthly installments based on 90 percent of the estimated value of concentrate produced that month, with final payment due on delivery to Japan.

Pembridge received its first US$3.4 million payment under this agreement in early November from 90 percent of the estimated value of the copper, gold and silver contained in 1,734 metric tons of concentrates produced during October.

The UK-based company has now received a second US$3.7 million advanced payment from Sumitomo for 1,793 dry metric tons of concentrate produced during November. 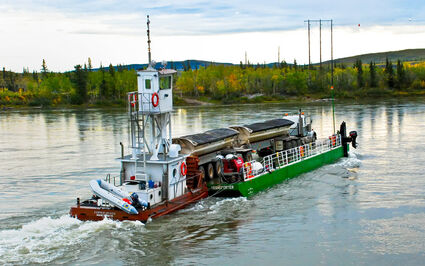 A truckload of copper concentrates from Minto Mine is being barged across the Yukon River on its way to market. During the winter months, an ice bridge is used to get the concentrates across this iconic northern river.

"This payment, for production in November 2019, is the second monthly advanced payment made to Minto from Sumitomo, bringing total payments received to over US$7 million since Minto recommenced production seven weeks ago," said Pembridge Resources Chairman and CEO Gati Al-Jebouri. "It proves the operation's ability to generate steady cash flow as operations ramp up. It is the objective of Minto mine management, with the oversight from Pembridge, to ensure that production continues to grow while ensuring an efficient and cost-effective operation."

Copper concentrates produced at Minto are trucked from the mine to the Skagway Ore Terminal in Southeast Alaska, where they can be loaded on ships to a refinery. In route to Skagway, the concentrate laden trucks must cross the Yukon River by barge or an ice bridge. During the spring and fall, when the ice is not stable enough to drive on, yet the river is not open enough for barges, concentrates must be stored at Minto.

The monthly advanced payments from Sumitomo provide Pembridge with steady cash flow even during these shoulder seasons as it ramps up operations at its newly acquired mine.