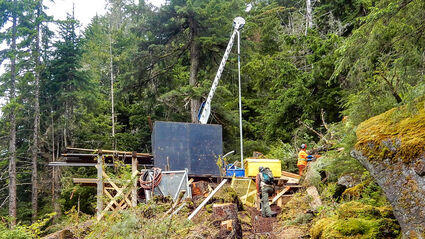 The 2019 drilling at Dolly Varden primarily tested targets beyond the resource areas on this high-grade silver property at the southern tip of British Columbia's Golden Triangle.

Dolly Varden Silver Corp. said the work it carried out in 2019 has positioned its namesake high-grade silver project in British Columbia for additional growth in 2020.

Located at the southern tip of B.C.'s Golden Triangle, the Dolly Varden property covers historic high-grade silver mines that date back to the early 20th century. Much of the company's exploration work has focused on exploring in and around four of these producing mines – Torbrit, Dolly Varden, Wolf and North Star.

The 11,836 meters of drilling completed this year in 44 holes, however, investigated the property's wider potential. Targeting for this drilling was based on a recent reinterpretation of the geological model for the known deposits, improving confidence and providing a more robust framework for targeting future exploration on the high-grade silver property.

This led to the discovery of Chance, a target about 4,000 meters north of the Torbrit deposit that was known from shallow surface diamond drilling in the 1960s.

In addition to Chance, the reconnaissance drilling carried out this year turned up interesting results at four other exploration targets on the property – Silver Horde, Mackay, Beginner's Luck and Kitsol South.

In addition to exploring the wider potential of the property, Dolly Varden carried out metallurgical testing for recovering the silver, zinc and lead in the two primary deposits – Torbrit and Dolly Varden.

The company says this work shows that the production of separate lead and zinc flotation concentrates from a composite of representative samples from Torbit to be relatively straightforward. The majority of the silver reports to a high-grade lead concentrate averaging 58 percent lead, 25,000 g/t silver and 3 percent zinc. The zinc concentrates average 36 percent zinc and 2,979 g/t silver. The floatation recovers about 64 percent of the silver, 78 percent of the lead and about 64 percent of the zinc. Using leaching to recover additional silver from the tails of the floatation circuit increased silver recoveries for Torbrit to 88 percent.

For the Dolly Varden deposit composite, the higher zinc content relative to lead made the production of a high-grade lead concentrate more challenging. A lead concentrate was produced containing 21 percent lead, 22,000 g/t silver and 23 percent zinc. No separate zinc concentrate was created in this test. The floatation circuit recovered 59 percent of the lead and 65 percent of the silver. Leaching of the tails increased the silver recovery for Dolly Varden to 84 percent.

The Dolly Varden property is well positioned to deliver the lead and zinc concentrates to market.

A 25-kilometer (16 miles) access road that follows a railway bed originally constructed for the historic Dolly Varden Mines Railway, links the property to tidewater at the head of the deep-water Alice Arm fjord.

Dolly Varden said numerous repairs to creek-crossing bridges have been performed and the road is accessible to the heart of the mineral claims.

The base camp for the Dolly Varden project is in the nearby village of Alice Arm, where the company has a drill core logging facility, core storage, geology office, cook house, machine shop and camp.

The Dolly Varden project lies within the traditional territories of one First Nation and that nation has an established treaty with the federal and provincial governments.

An initiative to demonstrate the cooperation between the mining industry, First Nations and the Province for development in the Golden Triangle was established in 2017 as the British Columbia Regional Mining Alliance (BCRMA).

Dolly Varden Silver Corp is a founding member of the BCRMA, along with the Nisga'a Lisims Government, the representative body of the Nisga'a First Nation; Tahltan Central Government, which represents the Tahltan First Nation; province of British Columbia; Association for Mineral Exploration; and three other active junior mining exploration companies.

Dolly Varden also focuses on local hire, with members of the Nisga'a making up roughly one-third of the workforce on the Dolly Varden project.

"Our team has advanced the Dolly Varden project substantially over the past season, including new discoveries from diamond drilling, an updated mineral resource estimate, and completion of successful metallurgical tests. As well, on the ground we have improved the logistical advantages and strengthened our relationships with the community," said Dolly Varden Silver President and CEO Gary Cope. "The Dolly Varden project is well positioned for growth in the coming year."