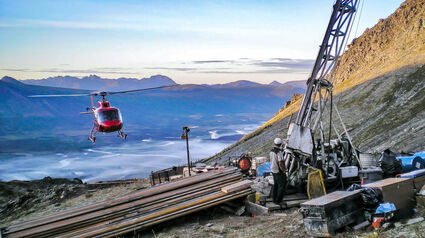 A helicopter approaches during the 2007 drill program at Arctic, a high-grade VMS deposit in the Ambler Mining District.

This Northwest Alaska project covers a more than 70-mile (115 kilometers) stretch of Earth's crust that is uncommonly rich in a variety of precious, base and critical minerals. So far, Trilogy and South32 have outlined roughly 9 billion pounds of copper, 3.6 billion lb of zinc, 628 million lb of lead, 77 million lb of cobalt, 58 million ounces of silver and 770,000 oz of gold in industry compliant resources at Arctic and Bornite, the two most advanced UKMP projects.

And there are more than a dozen other known historical deposits and occurrences to explore across the roughly 353,400-acre land package.

Since entering into an option to earn a 50 percent JV interest in UKMP in 2017, South32 has invested more than US$30 million into exploration on the copper-rich property. This US$10-million-per-year funding was required to keep the option in good standing and provided the Aussie major an opportunity to fully evaluate the potential before making the bigger investment announced yesterday.

"Investing in exploration to create shareholder value is integral to our group's strategy. Forming the UKMP joint venture will be another important milestone as we reshape and improve our portfolio, by adding high-quality copper and base metals development options," said South32 CEO Graham Kerr. "The decision to exercise the option follows a successful exploration partnership with Trilogy Metals and is an exciting step forward."

"Having the support and partnership from a senior mining company like South32 – both in terms of their financial support and technical expertise – is tremendous for Trilogy Metals," said James Gowans, interim president and CEO of Trilogy Metals. "We are very excited to advance this partnership."

Forming partnerships has proven to be the key to unlocking the rich mineral endowment that the Ambler Mining District has long been known to possess.

Located a mere 16 miles apart, the Arctic and Bornite deposits on the UKMP property are each considered world-class copper assets that would have long since been developed if not for their remote location, some 200 miles off the beaten path in Northwest Alaska.

Arctic and more than a dozen similar volcanogenic massive sulfide prospects are located on state claims that have been held by mining interests for the better part of five decades. Bornite, on the other hand, is located on a parallel tract of land owned by NANA Corp., the Alaska Native regional corporation for Northwest Alaska.

Knowing that the best path to developing either of these world-class assets would be to bring them together, Rick Van Nieuwenhuyse, founder and former CEO of Trilogy Metals, reached out to form a partnership with NANA in 2011.

The combined property was renamed UKMP, a partnership that provides the critical mass needed to develop this remote Alaska region – both in terms of resources and people.

"An agreement like this can potentially lead to long-term economic benefits to the region," said NANA President and CEO Wayne Westlake.

Now the new partnership with South32, a major mining company with the financial and technical wherewithal to turn the world-class UKMP deposits to world-class mines, is the next critical step to seeing these long-term economic benefits realized.

"This joint venture is an investment in the future – not only for the UKMP but for NANA shareholders and the people of Alaska," said Westlake. "Continued exploration offers opportunities for economic growth, allowing NANA to further fulfill our mission to improve the quality of life for our people."

Trilogy's vision to partner with NANA was also key to drawing South32 to UKMP and likely played an important role in the company deciding to invest roughly US$175 million to be a 50 percent JV partner in the asset.

"We look forward to furthering our partnership with Trilogy Metals and NANA Regional Corporation, the Iñupiat-owned Alaska Native corporation in the region, as we work together to advance the Arctic and Bornite deposits and further test the significant regional potential across the Ambler Mining District," said Kerr.

More information on NANA and its mining partnerships can be read at NANA – Two worlds one spirit in the March 2019 edition of North of 60 Mining News.

Over the two years since the completion of the PFS, Trilogy has been investing heavily in the geotechnical and engineering studies needed to put the finishing touches on the feasibility study for Arctic, expected to be finalized in the first half of 2020.

As Trilogy focused on readying Arctic for permitting, South32 invested its US$30 million share of exploration spending on Bornite, a large copper-cobalt deposit about 16 miles southwest of Arctic that is second in the pipeline of Ambler District mine development projects.

This year's South32-funded drill program at Bornite included 10 holes (7,610 meters) of drilling that primarily focused on expanding and upgrading the underground resource. This drilling continued to expand and upgrade the already large copper-cobalt resource at Bornite.

The current resources for both Arctic and Bornite are calculated to NI 43-101 standards, which is required for Canadian-listed mining companies. With South32 now taking the helm, these resources will be recalculated to be Joint Ore Reserves Committee- (JORC) compliant, which is the standard for Australia-listed companies.

The new JORC-compliant resource is expected to be completed during the first quarter of 2020.

More information on the 2019 program at UKMP can be read at Trilogy explorers prolific Ambler District and South32 invests in 2 Alaska copper projects in Mining Explorers 2019, a magazine published by North of 60 Mining News.

The only reason Arctic and Bornite have not yet been developed into world-class mines is they are located about 200 miles beyond the roads needed to deliver metal-rich concentrates to world markets.

Trilogy, NANA or South32, however, will not be the ones to build a road to the Ambler district. Instead, Alaska Industrial Development and Export Authority (AIDEA) is taking the helm for permitting and building an industrial access road to the region.

AIDEA, a quasi-state-owned authority, was established by the Alaska Legislature more than 50 years ago to invest in and manage large projects that will bolster Alaska's economy and create jobs – projects like the Ambler Road.

AIDEA will be repaid for its investments into the Ambler Road by charging tolls to the mining companies that use the road. A similar arrangement for the road and port that supports the world-class Red Dog zinc mine to the west has paid AIDEA back its costs for building and maintaining the facilities and is now a profit generator for the authority.

AIDEA pays Alaska a dividend from such successful investments, including a $14.48 million payment to the state this year and more than $442 million in total.

AIDEA is applying the Red Dog model to permitting and building the Ambler Road.

With this road access, AIDEA sees the potential of at least four mines being developed in the Ambler District – Arctic and Bornite; Smucker to the west; and Sun to the east.

The development and operation of these mines would generate thousands of jobs and pay hundreds of millions of dollars in annual wages, not to mention money flowing to NANA, as well as municipal and state governments.

AIDEA applied for permits to build the Ambler road in 2015 and the federal authorization to build this vital transportation corridor linking the Ambler Mining District to Alaska's road and rail system are expected in the near term.

The primary decision on these permits will come from the U.S. Bureau of Land Management, the lead federal agency for permitting the Ambler Road, which is finalizing an Environmental Impact Statement (EIS) for the 211-mile road that ends near the Arctic and Bornite deposits.

The Ambler road would extend 211 miles west from the Dalton Highway to the Arctic and Bornite deposits on the Upper Kobuk Mineral Projects.

"I realize the importance of this project to the state of Alaska and for the state's ability to develop its resources and as such, I am committed to ensuring a thorough and comprehensive analysis," said BLM Alaska State Director Chad Padgett.

With the key partnerships forged and this vital road nearing a reality, unlocking Ambler Mining District's rich resources is getting closer to certainty.

Additional details on the Ambler road can be read at Thou shall build road to Ambler District, in the Oct. 14 edition of North of 60 Mining News.