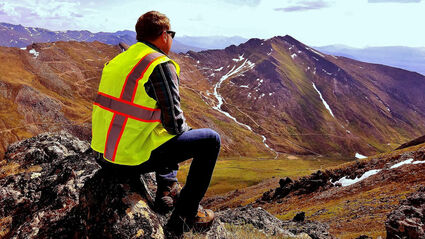 Rick Van Nieuwenhuyse at Arctic, and a world-class VMS deposit in the Ambler Mining District that Trilogy Metals advanced to the permitting stage.

Contango ORE Inc. Jan. 6 announced that Rick Van Nieuwenhuyse has taken over as President and CEO of the Texas-based mineral exploration company advancing the Peak Gold project in eastern Alaska.

Former President and CEO Brad Juneau has transitioned to executive chairman of Contango ORE, a company he co-founded and lead for the past decade.

"I have known Rick for several years and followed his success with admiration," said Juneau. "We are extremely pleased that he has agreed to join our company as President and CEO and are confident that his proven leadership will enable him to provide Contango with a level of expertise we simply have not previously enjoyed."

Van Nieuwenhuyse has been directly involved in the discovery and subsequent advancement of two of Alaska's largest gold and copper discoveries over the past 20 years – the 40-million-ounce Donlin Gold project and the Arctic and Bornite polymetallic deposits in the Ambler Mining District.

After serving as vice president of exploration for Placer Dome Inc. from 1990 to 1997, Van Nieuwenhuyse founded Novagold Resources Inc. and acquired the Donlin Gold project in Southwest Alaska. After establishing 39 million ounces of gold reserves and taking Donlin Gold into permitting under a partnership with Barrick Gold Corp., Van Nieuwenhuyse established a mine development team to take over at Novagold.

He formed Trilogy Metals Inc. in 2011 to advance exploration of Arctic, Bornite and other deposits that are found on a larger package of state and NANA Corp. lands known as the Upper Kobuk Mineral Projects (UKMP).

In December, Australia-based South32 Ltd. announced that it is exercising its option to become a 50 percent joint venture partner in UKMP by investing US$145 million in the projects.

Permitting for a mine at Arctic is expected to get underway in the coming weeks and a preliminary economic assessment that provides a first look at mining Bornite is expected soon.

With Arctic advanced to the permitting stage and a partner with the financial and technical wherewithal to advance the UKMP projects to development, Van Nieuwenhuyse stepped down from his executive roles at Trilogy.

"His experience in leading early stage projects from the exploration stage through permitting and construction will be invaluable as we move our Peak Gold project forward," said Juneau. "We feel that working with Rick will enable us to grow the company at a pace that would not be possible without his experience, expertise, and guidance."

Van Nieuwenhuyse is excited to be leading a company with a high-grade gold project that is road accessible and has vast exploration potential.

"The samples at the Peak Gold deposit with over four grams per tonne (metric ton) gold resources represents one of the highest grade potentially open-pitable gold deposits in the world," Van Nieuwenhuyse said. "Unlike most gold deposits in Alaska, the Peak Gold project is located right along the Alaska Highway with grid power not far away."

Discovered by Contango ORE in 2009, Peak Gold (sometimes referred to as Tetlin) hosts two skarn deposits – Main Peak and North Peak – on an underexplored property that covers roughly 850,000 acres west and south of Tok, a crossroads town in eastern Alaska.

A preliminary economic assessment completed toward the end of 2018 outlines plans for open-pit mines at these deposits and a 3,500-metric-ton-per-day mill that would produce 1.09 million oz of gold and 2 million oz of silver over an initial eight-year mine-life.

Based on US$340 million in capital and closing costs, the cost for every ounce recovered from the mine outlined in the PEA is a remarkably low US$470.

"There is a lot of work to do to demonstrate a feasibility level reserve, but in mining grade is king and Peak has it," Van Nieuwenhuyse said. "The project represents an excellent opportunity to develop Alaska's next gold mine." 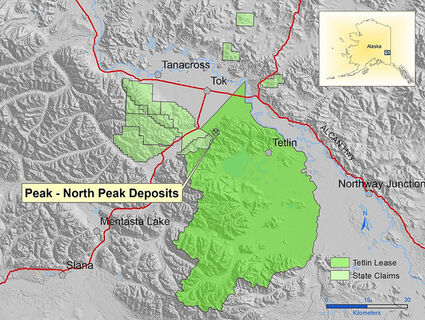 "I look forward to working with the Contango team to advance the Peak Gold deposit to a construction decision, as well as to explore the nearly 850,000-acre land package consisting primarily of private land, with neighboring state of Alaska claims," said the new Contango ORE executive. "We have only just begun to explore this prolific belt of rocks."

Best of luck to Rick and the team at Contango!