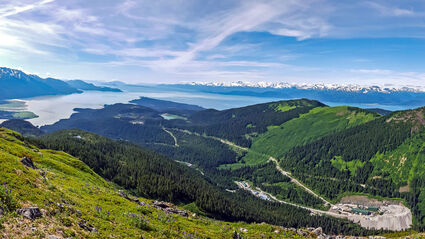 Looking down on the Kensington Mine. It took more than 19 years, 1,000 separate studies and a trip to the U.S. Supreme Court, to secure the permits needed to develop this high-grade underground gold operation in Southeast Alaska.

Mining and other trade organization leaders welcome the White House's proposed revisions to the National Environmental Policy Act (NEPA), as much needed upgrades to the burdensome and often redundant regulations that are holding back investments into mines and infrastructure in the United States.

"The mining industry is all too familiar with the project delays and escalating costs associated with NEPA compliance," said National Mining Association President and CEO Rich Nolan. "Our permitting process is broken, and NEPA's historical problems play a big part in the unnecessary obstacles standing in the way of the responsible use of our natural resources."

"The intent of NEPA is to ensure federal agencies make informed permitting decisions associated with a wide variety of public and private development projects," Donohue and McGarvey wrote in a joint column published by The Hill. "Those reviews are just as important now as they were in the 1970s, but instead of aging gracefully, the review process has grown increasingly outdated, and is too often used as a tool to obstruct investment and block new infrastructure."

The White House is seeking to streamline the permitting process for infrastructure, mining and other industries in the U.S.

"The administration is committed to ensuring that we are good stewards of our environment, while supporting American prosperity," said President Donald Trump.

The White House Council on Environmental Quality (CEQ) found that it takes an average of roughly 4.5 years to complete an environmental impact statement (EIS) under NEPA. The timeline for this assessment needed by all major development projects in the U.S. increases to more than seven years for mining and infrastructure.

In Australia and Canada, countries with strong environmental regulations, the average time only takes two to three years to permit a mine.

NMA said the mine permitting delays in the U.S. is causing domestic manufacturers to look to countries with weaker environment laws for their metals.

"Reforming the NEPA process and creating a more efficient permitting system are critical to improving the competitiveness of the domestic mining industry, job creation, and decreasing our reliance on foreign sources of energy and minerals," said American Exploration and Mining Association Executive Director Mark Compton.

CEQ aims to get mine permitting in the U.S. into a timeframe that is similar to its western mining jurisdiction counterparts by:

• Require joint schedules, a single EIS, and a single record of decision (ROD), where appropriate, for EISs involving multiple agencies.

• Strengthen the role of the lead agency and require senior agency officials to timely resolve disputes to avoid delays.

• Promote the use of modern technologies for information sharing and public outreach.

The proposed NEPA revisions also include clarification of the scope of NEPA reviews, as well as enhanced coordination with state, tribal and local governments.

Many of CEQ's proposed revisions builds off of President Trump's Executive Order 13807, which requires federal agencies to process environmental reviews and authorization decisions for "major infrastructure projects" as one federal decision.

"Today's action is a concrete step in the right direction," Nolan said of the modernization of NEPA proposed by CEQ on Jan. 9. "The proposal reflects the original intent of NEPA, which is to require a hard look at the environmental impacts of major federal projects, not to stop projects in their tracks."

Comments can be submitted online by visiting https://www.regulations.gov/ and following the instructions for submitting comments to Docket ID No. CEQ-2019-0003.

CEQ will host two public meetings on the proposed NEPA changes. The first will be held on Feb. 11 at the U.S. Environmental Protection Agency Region 8 headquarters in Denver, Colorado, followed by a Feb. 25 hearing at the U.S. Department of the Interior Yates Auditorium in Washington D.C.