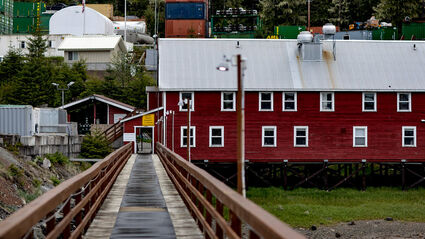 Greens Creek workers must spend 14 days in quarantine at a Juneau facility before walking down this boardwalk to start a 28-day rotation at the Southeast Alaska silver mine.

While the COVID-19 outbreak is unique in terms of the government and societal response, Hecla Mining Company has dealt with pandemics over its 129-year history and had a plan that was implemented early on at its five mines in the United States, Canada and Mexico.

"Hecla's quick response to the COVID-19 outbreak began in February and has protected our workforce, enabling them to continue to safely operate our mines," said Hecla Mining President and CEO Phillips Baker, Jr.

Due to government mandates, however, Hecla temporarily suspended operations at its Casa Berardi Mine in Quebec and San Sebastian Mine in Mexico.

"While government orders have shut down two mines, our U.S. mines continue to operate as planned," said Baker.

As COVID-19 risks and government orders increased, Hecla's increased the implementation of its pandemic plan, which includes limiting access to mine sites, social distancing, enhanced cleaning practices, temperature testing and 14-day quarantine facilities. Fortunately, all the communities where Hecla operates have a small number or no occurrences of COVID-19 with no known cases within the workforce or their families.

In addition to safeguarding the health of workers at its mines and the communities near them, Hecla executed business protecting strategies such as enhancing the chain of supplies to its operations, as well as issuing new bonds that mature in 2028 and expanded its revolving credit facility to $250 million.

The company drew cash out of the facility in March to ensure it has substantial liquidity.

"Our balance sheet is strong with over $200 million in cash, and no near-term debt maturities with our revolver debt not due until 2023 and senior notes in 2028," Baker said. "Also, our charitable foundation is stepping up to support the communities we operate in during this time of need."

Established in 2007, Hecla's charitable foundation has contributed more than $3.4 million to the communities it operates in. Given the extraordinary needs arising from the pandemic, Hecla expects the foundation to initially contribute up to $125,000 more than usual. An initial $20,000 matching contribution has been made to the Southeast Alaska food bank.

While the coronavirus outbreak has changed the way Greens Creek must operate, this high-grade silver mine near Juneau, Alaska continued to live up to its flagship status.

The mill operated at an average of 2,185 tons per day during the first quarter.

In April, Greens Creek began quarantining all employees in a Juneau facility for 14 days before employees start a 28-day rotation. No one, including Juneau-area residents, is allowed on the site who has not been quarantined.

COVID-19 protocols have been established at the company's Nevada operations, including daily temperature testing and questionnaires, with significant social distancing by staggering the buses.

Nevada operations produced 16,965 oz of gold which is 60% higher than the 10,364 oz produced during the first three months of 2019. The mining of developed oxide ore is expected to continue at Fire Creek until about mid-year, when the mining activities will stop while studies are completed.

While no cases of COVID-19 have been reported in the Idaho county where Lucky Friday, temperature testing, questionnaires and social distancing are among the prevention measures at the mine.

Only a few ounces of silver were produced at Lucky Friday during the first quarter. This had more to do with calling back and training a returning workforce after a prolonged strike that stopped operations than interferences related to COVID-19. 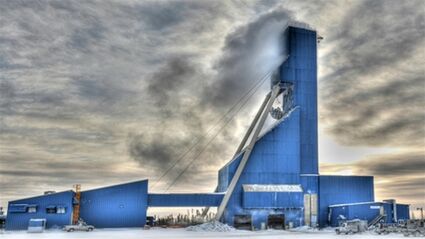 Operations at the Casa Berardi gold mine have been suspended until at least May 4 to comply with orders issued by the Quebec government.

The virus, however, has delayed work on a hoist project at one of the mine shafts due to a key vendor being unable to currently support the work during the stay-at-home order.

During the third week in March, the Quebec Government ordered the mining sector to reduce operations to only those systems needed to protect the facilities and environment.

This suspension, which affects Hecla's Casa Berardi Mine was originally expected to last until April 13 but has now been extended until May 4, to comply with Quebec's stay-at-home order.

Similarly, an orderly wind-down of the operations at San Sebastian are underway to comply with the Mexican government's order to suspend operations until April 30. San Sebastian expects to maintain a minimum complement of workers to protect the facilities and environment while operations are suspended.