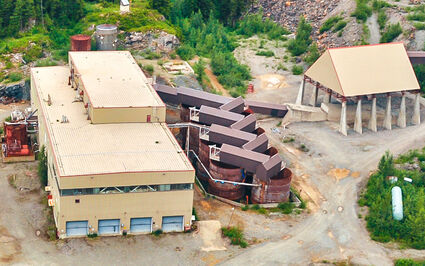 With a few refurbishments, Ascot's Premier mill is expected to once again process ore from deposits around the mining town of Stewart, at the southern tip of B.C.'s Golden Triangle.

Ascot Resources Ltd.'s vision of bringing commercial gold and silver mining back to Stewart, British Columbia took a major step towards reality with the completion of a feasibility study on breathing new life into the past producing Premier Mine.

The feasibility study envisions four mines in the Stewart area – Silver Coin, Big Missouri, Red Mountain and Premier – providing ore to the existing 1990s era mill at Premier. With the mill operating at 2,500 metric tons per day, this operation is expected to produce roughly 1.1 million ounces of gold and 3 million oz of silver over an initial eight-year mine life.

At US$1,400/oz gold– the base case metals prices scenario – the operation outlined in the feasibility study generates an after-tax net present value (5% discount) of C$341 million, a 51% internal rate of return and a capital payback period of just 1.8 years.

"The completion of the feasibility study marks an important milestone for Ascot in the progression of restarting the project," said Ascot Resources President and CEO Derek White. "The current strong gold price environment, robust projected economics and quick payback creates an attractive opportunity to build our mine."

With a mill in place and ready for upgrades, as well as initial underground development already established at Red Mountain and other mining areas, the feasibility study estimates only C$147 million in initial capital will be needed to restart operations. This includes a contingency of 9% and 22% in indirect costs.

Permits are already in place from previous mining at Premier. These authorizations, however, must be amended to accommodate the renewed mine plan. In addition, an assessment of the impacts of the proposed mines at Premier and Red Mountain on Nisga'a Nation interests will need to be conducted.

Under benefits agreement previously reached for mining at Red Mountain, Nisga'a Nation would receive cash payments tied to achieving permitting, financing and production milestones at Red Mountain, as well as a percentage of provincial mineral tax from production at the site.

This agreement likely provides a framework for a more comprehensive deal that encompasses the entire Premier Mine project.

Once permit amendments and agreements with Nisga'a Nation are complete it is expected to take less than a year – 40 weeks, according to the feasibility study – to complete the construction to resume operations at Premier.

The Premier mill will utilize conventional crushing, grinding and gravity circuits followed by a standard carbon-in-leach process to produce a gold doré. With most of the equipment already in place, the recovery plant refurbishment will consist of existing, new and repaired equipment and supporting infrastructure.

Mining is expected to begin at Silver Coin, which is about five kilometers (three miles) north of the mill.

Silver Coin accounts for 1.79 million metric tons of the Premier reserves, indicating that the resource base has been expanded and upgraded since January.

Big Missouri, which is just north of Silver Coin, is the second mine slated to provide ore to the mill.

Roughly 809,000 metric tons of this resource has been upgraded to reserves destined for the mill.

Red Mountain, which is slated to begin feeding ore to the Premier Mill in year three, is located on a separate property about 24 kilometers (15 miles) to the southeast.

Prior to processing Red Mountain ore, the plant will add an energy efficient fine grinding mill and an additional pre-leach thickener to accommodate processing of the harder material and the finer grinding required to maximize gold recoveries from Red Mountain.

The high-grade ore in the Premier deposits are the last of the current reserves currently slated for the mill.

Roughly 1.03 million metric tons of this higher-grade ore has been upgraded to reserves.

All the deposits host inferred resources that Ascot believes can be upgraded with future underground drilling, which will add to the available ore and improve annual production rates. 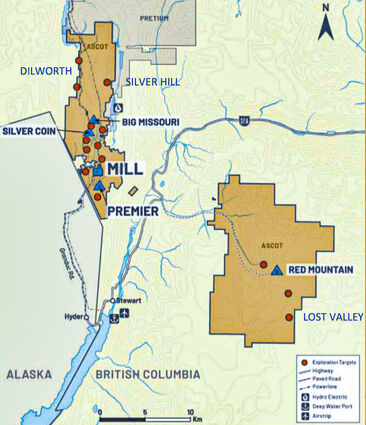 "Management's next steps will be focused on advancing this exceptional gold project with all our stakeholders while continuing to grow our mineral resources and reserves to enhance value through further drilling and delivering a number of identified opportunities," said White.

Ascot will seek funding for the construction and development of the Premier gold-silver mine project detailed in the feasibility study in the coming months.