Gold targets found at Sitka Mine on Unga 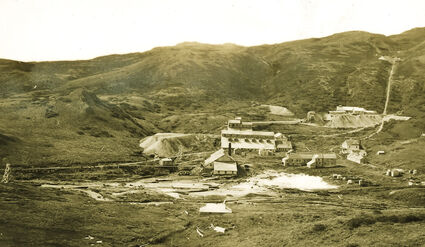 Established in 1886, Apollo-Sitka on Unga Island was the first underground hardrock gold mining operation in Alaska.

Redstar's Unga project covers roughly 93 square miles (240 square kilometers) of two islands south of the Alaska Peninsula, Unga and Popof islands, that has long been known for its high-grade gold. Apollo, the first hard rock underground gold mine in Alaska, and the nearby Sitka mine produced roughly 150,000 ounces of gold from high-grade epithermal veins from 1886 until they were shuttered in 1922.

The Sitka mine was reported to have produced several thousand ounces of gold from roughly 240 meters of underground working that mined high-grade gold from an outcropping vein.

The veins that supplied ore to Apollo and Sitka are reported to average around three meters wide and are located on the Apollo-Sitka trend, one of two high-grade gold trends that each cut roughly six miles across Unga Island.

The Shumagin trend, which is about 2,000 meters northwest and parallel to the Apollo-Sitka trend, hosts the SH-1 zone that has been a primary target of previous Redstar exploration.

Redstar said that prior to its 2019 investigation, only sporadic brownfields exploration of the Sitka vein has been completed since the closure of the mine. Underground sampling in the 1980s was reported to have sampled grades as high as 31.9 grams per metric ton gold and 161 g/t silver from the upper, oxidized portion of the vein. During that same time, one drill hole collared immediately west of the Sitka mine site (DDH02A) cut 3.96 meters of 28 g/t silver, 17.8% lead, 2.3% zinc and 0.7% copper at a depth of 80 meters. No drilling, however, was completed east of the mine.

Redstar's 2019 program tested for a possible easterly extension of the previously mined Sitka vein using ionic leach geochemical and radiometric surveys across the projected structure. The geochemical survey yielded anomalous gold results that trace a structure for 640 meters from the known vein at the Sitka mine. The geophysical survey results indicate a potential south dipping attitude of the buried structure.

These results indicate that the Sitka vein may extend 640 meters further east of the known mineralization at Sitka mine, which is roughly equivalent to the mineralized footprint at the Apollo mine and the surface trace of the recently reported SH-1 Zone.

"These fieldwork results have revealed a 640-meter-long, brownfields drill target just to the east of what was a high-grade gold and base metals mine on Unga Island," said Redstar Gold President John Gray. "As such, it represents a 500% increase in the potential strike length of the known Sitka vein which puts it in the same size range as both the original Apollo Mine located one kilometer (0.6 miles) to the west and the SH-1 Zone 3.7 kilometers (2.3 miles) to the north."

The company said this potential extension of the Sitka vein is a high probability drill target that will be tested as soon as exploration is able to recommence with the aim of defining a NI 43-101 compliant resource. 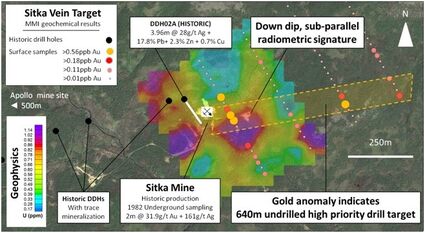 Establishing a resource at Sitka would bolster Redstar's objective of creating an economically minable resource at Unga.

"Redstar intends to drill this high probability target at Sitka together with a group of other high priority zones including the recently announced targets at the Aquila Zone, the historic Centennial Zone and projected on-strike and down-dip extensions at the SH-1 Zone in order to add to the overall gold resource at the Unga project," said Gray.