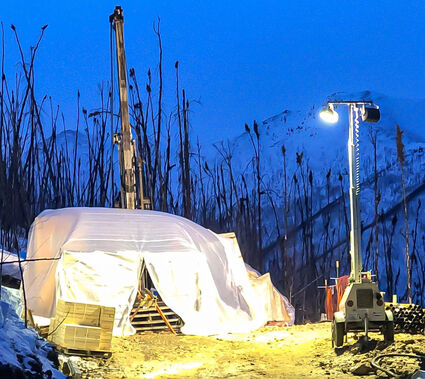 Drilling reaches about 30% of targeted depth in the second hole of the planned winter program at 64North before drill crews headed home to be with family ahead of a COVID-19 "shelter in place" order issued for Alaska.

Millrock Resources Inc. and Resolution Minerals Ltd. April 27 provided preliminary results from the 2020 drilling at 64North and plans for resumption of the program that was cut short due to COVID-19 concerns.

Australia-based Resolution Minerals has an option to earn a 60 percent joint venture interest in this large gold project by investing US$20 million into exploration, plus making US$200,000 in cash payments and issuing 38 million Resolution shares to Millrock over four years.

The Resolution-funded exploration began with a winter drill program to test the Aurora target on the West Pogo claim block.

Northern Star has traced high-grade gold in the Goodpaster discovery zone to the western border of the Pogo property and just east of the Aurora target on West Pogo.

This program testing for Pogo-style high-grade gold mineralization extending into the Aurora target area, however, was cut short after one hole reached target depth and a second was about 30% complete.

"The core we drilled in the first hole of the program demonstrated a Pogo-like system with an abundance of alteration and sulfide mineralization indicating a robust hydrothermal system. Gold values are not strong, but the mineralization we have intersected appears to be similar in character to Northern Star's Goodpaster gold deposit, located immediately to the northwest of our Aurora prospect," said Millrock Resources President and CEO Greg Beischer. "The resumption of drilling will continue the systematic exploration of the favorable geophysical and structural/stratigraphic targets that comprise the Aurora prospect area." 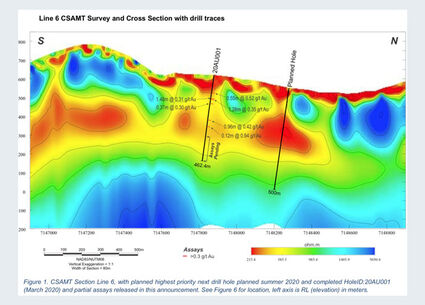 This cross section from line six of a CSAMT geophysical survey carried out on the West Pogo property shows hole 20AU001 and a compelling target planned to be drilled during a summer program slated to begin in late May at 64North.

Hole 20AU001 tested a secondary target and was drilled early in the program in order to take advantage of its proximity to the water well, in order to establish the winter program at Aurora. If not for the need to pause drilling due to COVID-19, the higher priority targets would have also been drilled with the six holes slated for drilling during the winter program.

The completion of 20AU002 and the other four holes originally slated for the winter program are expected to be completed after spring thaw, expected in the latter half of May.

Resolution Minerals Managing Director Duncan Chessell said the 64North partners look forward to testing the most compelling targets the 2,000- by 5,000-meter Aurora prospect has to offer when summer drilling begins.

"Our next task is to vector in on the zones that contain higher grade gold," he said.