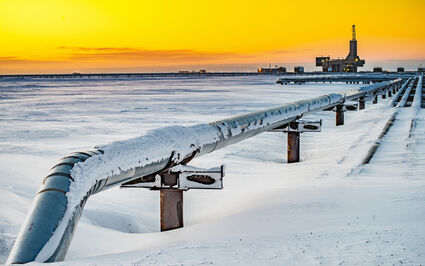 The price of Alaska North Slope oil dropped into subzero territory for the first time on April 24. While oil prices bounced back, the current climate will likely add urgency to longtime talks of diversifying Alaska's petroleum-dependent economy.

The price of oil and gold heading in opposite directions in the wake of the COVID-19 pandemic could mark a tipping point that steers Alaska's economy on a new trajectory more rapidly than policymakers and prognosticators previously envisioned.

As lawmakers focus their attention on slowing the spread of novel coronavirus in Alaska and re-opening the state for business as quickly and safely possible, the largest revenue stream to state coffers plummeted to subzero territory.

North Slope oil has plunged from around US$70 per barrel in January to negative territory as the world is awash in oil due to less consumption because of the global COVID-19 lockdown and Saudi Arabia opening the oil spigot due to a production dispute with Russia.

As a result of these global events out of Alaskan control, storage space for oil is becoming more valuable than the crude itself, pushing the price of North Slope crude to minus $2.68/b on April 24. Joining a global effort to cut supply, Alyeska Pipeline Service Company reduced the amount of North Slope oil being delivered via the Trans Alaska Pipeline System by roughly 50,000 barrels per day.

Though production cuts and increased demand on the loosening of COVID-19 restrictions are expected to stabilize oil prices, the current climate will likely add urgency to longtime talks of diversifying Alaska's petroleum-dependent economy.

While looking at bolstering all of Alaska's other resource sectors – fishing, tourism, forestry, and mining – will be needed, steering Alaska's economy toward mining is likely the best solution on the table.

This is due to the fact that Alaska is among the richest mineral jurisdiction on Earth; mining a diversity of minerals provides a natural hedge to swings in global markets; and more of the minerals and metals the state is renowned for are going to be needed as world energy supplies transition away from petroleum.

Producing a mix of precious, base, industrial and critical metals has the potential to help Alaska's economy to perform well when global markets are strong and weather the rough patches, such as the unprecedented global economic slowdown left in the wake of COVID-19.

With the Federal Reserve pumping an extra $2.3 trillion dollars into the U.S. economy and central banks around the world carrying out similar programs to stimulate the economy in the wake of COVID-19, analysts are predicting the price of gold to rocket into record territory.

This, however, is expected to be a small rise in a much larger run that will take the precious metal to levels previously considered unfathomable by all except for the most ardent advocates of the safe-haven asset.

In its latest forecast, Bank of America Merrill Lynch is predicting the price of gold will hit US$3,000/oz in 18 months, or roughly double the price going into 2020.

This is a significant rise from the bank's previous outlook of US$2,000/oz, citing the massive monetary expansion by the Federal Reserve and other central banks in response to global economic stagnation caused by the COVID-19 pandemic.

Strong gold prices are helping to offset the drop-off in the price of zinc, which is typically the most valuable mined commodity in Alaska when it comes to total production value.

Like oil, the price of zinc and other base metals are dropping due to lower demand by sluggish industrial sectors around the globe.

The price for a pound of zinc has dropped from a high of around US$1.10 in January to around 85 cents.

Considered both a precious and industrial metal, silver is the third largest contributor to Alaska mining production. So far this year, the price for an ounce of silver has dropped roughly $3, from US$18 in January to current levels of around US$15.

Government closures of mines in response to COVID-19, however, have significantly affected global silver production. According to a recent report by GlobalData, roughly the equivalent of 66% of annual global silver production was on hold as of April 27. While some of these mines are being brought back online, the drop in supply could send prices higher.

Gold production in Alaska is currently on pace to be slightly higher this year, while silver, zinc and lead are expected to remain steady.

While the price of a barrel of North Slope crude is expected to stabilize as global economies begin to re-open and producers cut back on supply, the collapse in oil prices could be a precursor to a future tipping point in supply-demand dynamics as the world transitions to lower carbon-emitting power and transportation.

More solar, wind and other renewable energy sources are going to put downward pressure on the demand for Alaska oil.

The adoption of electric vehicles is adding to the diversification away from oil burning products.

In an October report, global investment advisor Morningstar Inc. forecasts that half of all new automobiles sold in 2030 will either be fully electric or hybrid.

While the transition to low-carbon energy and transportation means less demand for Alaska oil, it is going to push up the demand for numerous metals and minerals found in the state.

Take copper for example. World Bank Group estimates that the world will need roughly 550 million tons of this key metal for generating and transmitting electricity over the next 25 years, which is about the same amount humankind has produced in the past 5,000 years.

In addition to around 4.7 tons of copper, a three-megawatt wind turbine requires 335 tons of steel, three tons of aluminum, two tons of rare earth elements; not to mention the concrete, zinc and molybdenum that go into their construction and installation.

While wind and solar are going to require vast amounts of metals, the grid-scale storage required for the electricity they generate and the batteries powering the EVs traveling global highways are forecast to skyrocket the demand for cobalt, graphite, nickel and vanadium – all found in Alaska.

The low-carbon demand for these minerals, all of which are found in large Alaska deposits, is not lost on Gov. Mike Dunleavy.

"We are known as an oil giant ... but mining has always been incredibly important to the state of Alaska," he said in January, before the ramifications of COVID-19 were understood. "As we move toward a potentially different economy, based more on electricity, we are going to need those metals, those rare earths, those elements for the batteries, technologies and electronics." 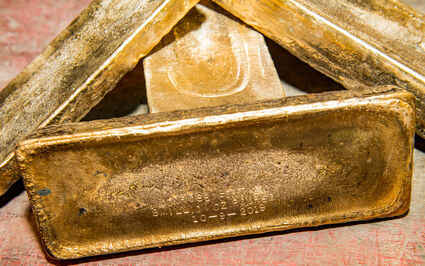 Bars from the 8-millionth-ounce gold pour at Kinross' Fort Knox mine near Fairbanks, Alaska. Bank of America expects the price of gold to top $3,000/oz in the next 18 months.

The governor made this statement while inviting the global mining sector gathered at the Mineral Exploration Roundup in Vancouver, British Columbia to investigate Alaska mineral potential.

"I've met a lot of fantastic folks who are trying to create wealth – provide America and Canada with the minerals and metals that we need to have the society that we have today," he said.

Dunleavy would like to see a good portion of that money invested in Alaska.

With Alaska's already shaky economy taking another blow in the aftermath of COVID-19, the jobs, wealth and revenue created by a robust mining sector is more crucial than when Alaska's governor delivered this message in January.