The silver-lined history of Keno City 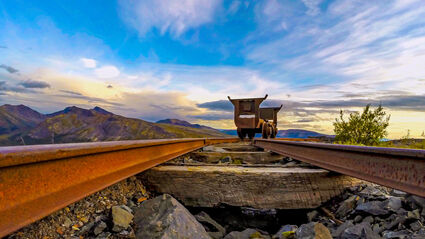 An ore car resting outside a historic mine on Keno Hill is a testament to this Yukon silver district's rich mining history.

More than a century-old silver discovery turned settlement may see a revitalization with recent exploration efforts at the Keno Hill District.

Lying within the traditional land of the First Nation of Na-Cho Nyäk Dun, the Keno Hill Mining District comprises almost 90 square miles (235 square kilometers) characterized by numerous mineral occurrences in more than 35 mines with a history of production.

According to the Yukon government records, between 1913 and 1989 the district produced in excess of 200 million ounces of silver from over 5.3 million tons of ore, with average grades of 44 oz of silver per metric ton, making it the second-largest historical silver producer in Canada.

Due to these rich lodes of silver, the Keno Hill Camp is renowned as one of the great mining camps of Canada. Not only was this Yukon district Canada's second largest primary silver producer and home to one of the richest silver-lead-zinc vein deposits ever mined in the world, it was one of the mainstays of the Yukon economy from the 1920s, after the decline of the Klondike, until the early 1960s.

At its peak, Keno supported roughly 15 percent of the territorial population. It also produced more wealth than the Klondike, one of the richest placer gold districts in the world.

Alexco Resource Corp., which hopes to resume the rich silver mining legacy Keno Hill is renowned for, has made painstaking efforts to clean up legacy environmental concerns in exchange for full ownership of the lands covering the district.

Roughly 225 miles (360 kilometers) north of Whitehorse, in Canada's Yukon Territory, past endless forests of spruce, birch and golden-leafed aspen, at the end of a gravel road known as the Silver Trail, lies Keno City, a name that better reflects a bustling past than the little more than a dozen current full-time residents.

Although practically a living ghost town now, the discoveries of silver and lead ore at Keno Hill caused the camp to grow into a bustling mining town that experienced the booms and busts reminiscent of other mining destinations around the globe.

Keno City area's past is rooted in mining, from the discovery of gold by the Gustaveson family in 1898, to hills that have provided ore rich in silver, zinc and lead to past and present miners in the district.

Keno City's history officially began, however, as a Swedish prospector's staked claim in 1919, its name inspired by a popular gambling game intended to lure hearty fortune-seekers with the promise of an ore-laden metropolis in Canada's frigid northern reaches.

This prospector was known as Louis Beauvette and, like many other prospectors, he lacked the finances to fully develop the claim, so he turned to Yukon Gold Company (YGC) engineer A.K. Schellinger, who convinced the company to invest in establishing a mining operation.

It was when word got out that YGC struck a deal, that a minor rush was sparked, and more than 600 claims were filed in 1920 on and around Keno Hill.

Immediately, problems arose, as the Keno mines were plagued with isolation due to Yukon River ships being unable to ascend the fast-running and shallow Stewart River and smaller draught vessels were unable to proceed past where the river became impassable for boats beyond Mayo, nearly 40 miles (65km) from the mine.

Due to these difficulties, the cost of hauling ore to Mayo was almost prohibitively expensive. If not for the fact of the ore deposits being so rich, the shipping costs would have made the entire operation unfeasible without expensive concentration facilities at the mine site.

YGC was unwilling to make such a large investment and limited the development to extracting only the richest silver veins in Keno Hill.

Yet in 1924, the company leased the mine's operation to newcomer Treadwell Yukon Company, of Juneau fame, and assigned it to a geologist by the name of Livingston Wernecke (of which the Wernecke Mountains are named).

Wernecke realized the operation required a long-term development strategy to make the mine cost-efficient, so construction of a concentration mill began, which allowed the company to exploit milling-grade ores as well as high-grade silver.

Two years later, however, a world collapse in silver prices and the depletion of the principle deposits led to the closure of the mill and by 1934 Treadwell shut down operations.

The effect on the nearby community of Keno was devastating, having grown from the success of YGC and Treadwell. Keno had evolved from a tent town to a community with log houses, a hotel, school, liquor store and an assay office.

The school and liquor store closed not long after the end of the mine and Keno City was fast on track to becoming another ghost town.

Despite this setback, the next year Treadwell would discover several rich new veins on nearby Galena Hill and with the price of silver suddenly increasing once more as the U.S. government enacted a silver purchasing plan, there was a moment of respite.

Even during the midst of a global depression, Treadwell confidently announced it would continue to expand its Keno operations.

A concentration mill was constructed at nearby Elsa, a small mining community established several years earlier, but once more expansion ground to a halt when the silver prices collapsed again towards the end of the 1930s.

Finally, in 1939, the Elsa mine and other Treadwell operations near Keno were all closed, for good.

In 1946, the new company was reorganized as United Keno Hill Mines Ltd. and what was initially considered a salvage program rapidly changed to full scale production upon discovery of another rich silver vein in this rich mining district.

United Keno Hill would successfully operate the mine for nearly five decades. Over that span, the company produced roughly 138.2 million oz of silver, 463 million lb of lead and 330 million lb of zinc.

Falling metal prices and increased environmental standards, however, weighed on the longtime Keno Hill miner and the company wrapped up mining activities there in 1989.

With the Keno Hill mine abruptly closing, many of the residents left, leaving behind relics of a mining history that spans more than 80 years.

Today, Keno is home to one of the Yukon's most comprehensive mining museums, an interpretive center, a collection of historic buildings and a smattering of old-timers that make up the dozen or so residents remaining to this day.

With no active mines in the Keno Hill Silver District, and mounting environmental impacts due to metal laden water coming from mine adits, in 2006 the federal government sold the assets of former United Keno Hill Mines through the Supreme Court to a subsidiary of Vancouver, British Columbia-based Alexco Resource Corp. for C$410,000.

Alexco would become full owner of the Yukon Keno Hill Silver District, however, with a stipulation – stop the environmental degradation and a contract to clean up past impacts.

With this deal Alexco also became the sole-source clean-up contractor to the government of Canada in charge of cleaning up the environmental damage left by former mining operations.

In 2009, Alexco decided to resume silver mining in the district, and today it boasts significant mineral resources at grades far higher than most of the world's primary silver producers.

Alexco's Bellekeno silver mine, one of the world's highest-grade silver mines with a production grade of up to 1,000 g/t silver, commenced commercial production at the beginning of 2011 and was Canada's only operating primary silver mine from 2011 to 2013. The opening of Bellekeno marked the rebirth and rejuvenation of one of Canada's most famous and prolific historic mining districts.

However, due to declining silver prices at the time, Alexco was forced to suspend operations.

Since shutting down production, the company has continued exploration of high-grade silver across the Keno property.

As a result, Alexco has substantially increased the high-grade silver reserves since 2013.

Early in 2019, Alexco completed a pre-feasibility study that contemplates a 430-metric-ton-per-day operation producing 27.2 million oz of silver, 67.2 million lb of zinc and 65.4 million lb of lead over an eight-year mine life. 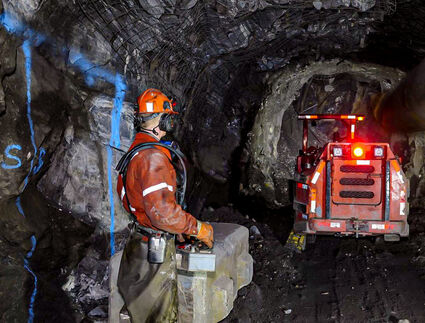 Crews carry out underground development at Flame & Moth, a deposit expected to be the centerpiece of Alexco Resource's plans to resume silver mining at Keno Hill.

"The results of the PFS reflect the exceptional asset we have in Keno Hill and demonstrate a robust high margin primary silver operation that can produce approximately 4 million ounces of silver per year," said Alexco Resource Chairman and CEO Clynt Nauman.

The new mine plan for Keno centers on Flame & Moth and Bermingham, two high-grade silver deposits that were not part of Alexco's previous mining on the property.

Alexco currently has the environmental licenses needed to begin production at Flame & Moth and expects the requisite license for Bermingham later this year.

The Keno Hill Mining District has seen many twists and turns and with another large operation in the works, as with several mining companies taking the reins in previous historic mine sites, new life may be brought back to the storied town of Keno City.