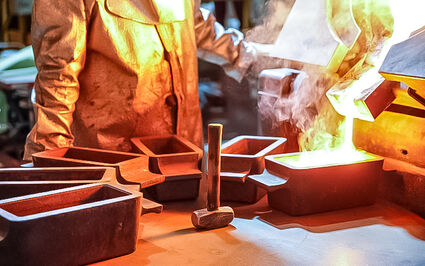 Kinross' Fort Knox Mine in Alaska produced 51,667 ounces of gold during the first three months of 2020.

COVID-19 has not affected gold output at Kinross Gold Corp.'s Fort Knox Mine but did contribute to higher production costs at the open-pit operation in Alaska during the first quarter of this year.

During the first three months of 2020, Fort Knox produced 51,667 ounces of gold, which is slightly less than the 53,183 oz of produced during the previous quarter but a roughly 37% jump over the 37,613 oz of gold produced at the Interior Alaska mine during the first quarter of 2019.

Kinross said the higher gold production compared to the same period last year is primarily the product of more ounces recovered from the heap leach pad.

The per-ounce cost of Fort Knox gold sold during the first quarter of this year was US$1,272, a 24% increase over the US$1,023 production cost of sales during the first three months of 2019.

An increase in the amount of operating waste being stripped off in order to reach ore at Gilmore and impacts from COVID-19, which affected mining rates, were primary contributors to the increased costs at Fort Knox. Kinross said higher maintenance and power costs also factored into the increased costs to produce gold at the Interior Alaska mine.

The Gilmore project at Fort Knox remains on schedule, with initial ore from the expansion project expected early next year. Kinross said stripping continued during the first quarter and all procurement of the supplies needed for this year have been completed, with all critical materials already delivered to site.

A feasibility published for the Gilmore expansion during the second half of 2018 envisions nearly all of the gold mined from Gilmore will be recovered via heap leaching, a process that involves stacking the ore on a lined pad and using a mildly acidic leaching agent trickled over the ore to dissolve the gold into a solution that is pumped through a facility that recovers the gold.

To accommodate the ore mined from Gilmore, crews are constructing the new Barnes Creek heap leach pad. With warmer spring temperatures, construction crews have resumed construction of the heap leach and the facility is slated to be completed before the end of the year.

Kinross' overall first quarter gold output was not significantly reduced by COVID-19 and its earnings soared.

Kinross said this slight decrease was mainly due to lower production at Paracatu (Mexico), Kupol and Chirano (Russia), and partially offset by higher production at Fort Knox.

None of Kinross' mines were required to shut down as a result of the COVID-19 outbreak.

"During the quarter, we focused on protecting the health and well-being of our employees and communities against the spread of COVID-19 while maintaining the continuity of our operations in a safe manner," said Kinross Gold President and CEO Paul Rollinson. "As a result of our business continuity plans and precautionary protocols implemented across our global portfolio, and with the support of our host governments, all our mines remained operational during the quarter and were not materially impacted by the pandemic."

In April, Kinross highlighted the COVID-19 measures being implemented at Fort Knox as a prime example of the protocols being put into place to protect workers and communities during the pandemic.

More information on the COVID-19 protocols being implemented by Kinross Gold and Fort Knox can be read at Essential social distancing at Fort Knox in the April 10 edition of North of 60 Mining News. 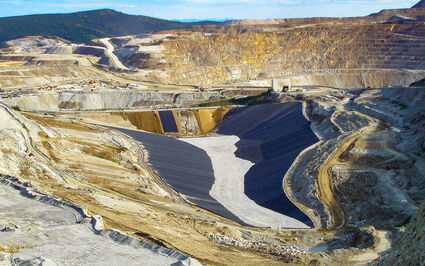 This photo, taken in August of last year, shows progress on the Barnes Creek Heap Leach Pad at Fort Knox prior to winding down development for the winter.

The company hopes the preventative actions it has put in place in response to the COVID-19 pandemic will help ensure steady gold output at its mines for the balance of 2020.

"Looking forward, we are confident that our commitment to health and safety, our risk mitigation plans, our financial and operational strengths, and our positive relationships with our host governments put us in a strong position to effectively manage through this challenging time," said Rollinson. "We have built a strong foundation, expect to continue generating strong cash flow, and offer an exciting future and a compelling value opportunity for our shareholders."