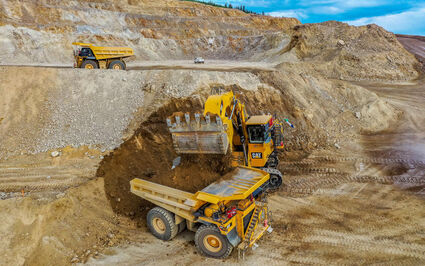 Crews mined 759,133 metric tons of ore at Victoria Gold's Eagle Mine in the Yukon during April.

Victoria Gold Corp. May 11 reported strong performance at its newly developed Eagle Gold Mine in the Yukon, thanks in part to the company's COVID-19 action plan.

Mining, crushing and stacking ore on the leach pad at Eagle increased significantly during April. As a result, the company reported a significant increase in gold production last month, a trend that is expected to continue in the coming months.

Eagle produced 6,768 ounces of gold during April, compared to a total of 10,544 oz during the first three months of 2020. While April production is less than the roughly 17,000 oz/month average expected from the mine, it shows the operation is ramping up to its full potential.

A gradual ramp up in gold production is part of the natural progression for a heap leach gold operation, as it takes time for the gold to leach out of the rock and to stack additional ore on the pad.

And crews stacked 786,954 metric tons of ore on the Eagle Gold pad during April, which is nearly as much as the 887,700 metric tons stacked during the first three months of 2020 combined.

Eagle's increasing gold output is coming at an ideal time.

"With production ramping up and gold price at record highs, Eagle is poised to exceed our projections!" said Victoria Gold President and CEO John McConnell.

On Sept. 17, when the first bar of gold was poured at Eagle, gold was hovering around US$1,500/oz. This already strong price for the precious metal has continued to increase to current levels of around US$1,700/oz and analysts are predicting this trend to continue.

Bank of America Merrill Lynch is predicting the price of gold will hit US$3,000/oz by mid-2021, or roughly double the price when Eagle poured its first ounce. 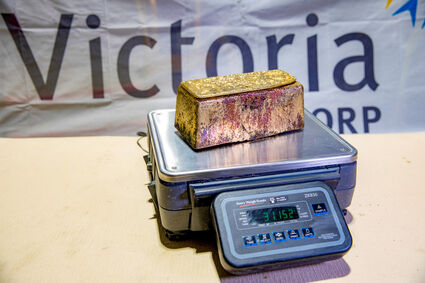 The price for an ounce of gold has increased $200 since this first bar of gold produced at the Eagle Mine in September.

To ensure that Eagle was able to continue to ramp up its gold output in this strong price environment, Victoria enacted strict COVID-19 measures to protect its workforce and Yukon communities.

So far, there have been no confirmed COVID-19 cases at Eagle Mine and only 11 in Yukon, with none of the cases in the territory requiring hospitalization and all fully recovered.

Eagle Gold employees worked 72,984 hours during April without a lost time incident. Continuing a perfect record for 2020, these workers logged 286,092 hours without an LTI during the first four months of the year.

"The ramp-up of Eagle has gone exceptionally well and we owe a sincere debt of gratitude to our employees and contractors for adopting and embracing Victoria's rigorous COVID protocols while working safely and diligently to ensure operational success," said McConnell.