Thomas Kaplan evangelizes virtues of monetary metals, owning a piece of the world-class Donlin Gold mine project North of 60 Mining News – May 29, 2020 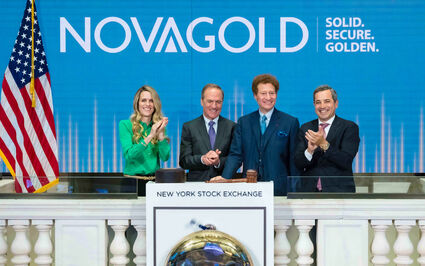 As the largest shareholder and chairman of Novagold Resources Inc., a company that owns 50% of the 39-million-ounce Donlin Gold project in Alaska, it is natural for New York billionaire Thomas Kaplan to elucidate potential investors on his predictions of coming rises in the price for an ounce of gold. The truth, however, is the renowned entrepreneur and natural resources investor is not bullish on gold because he has skin in the game. Instead, he is a major owner of the largest undeveloped pure gold deposit on Earth because he sees the price for this monetary metal rocketing much higher in the coming years.

For Gold's Evangelist, as he was dubbed by Bloomberg Business in 2010, owning a piece of a world-class gold deposit in a safe jurisdiction is "the surest way to make money going forward."

"In my world, being as close to pure gold, or pure monetary metals – gold and silver – is as close to the Holy Grail as you are going to get," Kaplan told Novagold shareholders.

Kaplan, an Oxford-educated historian who began investing in natural resources in the 1980s, knows that gold and silver have served as currencies throughout man's written history, a role they continue to serve today.

At around 350 B.C., Greek philosopher Aristotle defined money as an item that is durable, portable, divisible, and intrinsically valuable. By this definition, gold and silver beat out current fiat currencies on one point – intrinsic value.

"So, when we look at gold, we have to see it as a currency," Kaplan said.

"It is in fact the leading reserve of central banks that doesn't reflect someone else's liability ... or require the backing of another institution," the Novagold Chairman added, referring to fiat currencies and other paper assets.

Kaplan is not the only noted investor who sees gold as money.

"Gold is a currency. We have dollars, we have euros, we have yen and we have gold. If you don't have (10% of your assets in) gold, there is no sensible reason other than that you don't know history, or you don't know the economics of it," said Ray Dalio, who grew Bridgewater from a kitchen table investment firm into the fifth most important private company in the U.S., according to Fortune Magazine.

With increased economic risks to fiat reserve currencies such as dollars, euros and yen, central banks are adding greater amounts of gold bullion to their vaults.

According to World Gold Council's 2020 Central Bank Gold Reserves survey, 20% of central banks intend to increase their gold reserves over the next 12 months, compared to just 8% of respondents in the 2019 survey.

This may be a sign that central banks' views on gold are in line with Kaplan's.

"When you look at gold, you have to look at it now as being one of the greatest currencies, if not the currency, with the best risk-reward going forward," the Novagold Chairman said.

Kaplan believes that institutional and private investors will join central banks in stashing some extra gold in their vaults.

"Gold may be on the cusp of being reaffirmed as a truly institutional quality asset that everyone wants to own," he said.

Kaplan, however, does not give novel coronavirus outbreak much credit for climbing gold prices.

"I do not believe COVID-19 is the reason gold is at these levels – gold was already near $1,600 before any mention of COVID," he said.

Instead, the resource investing billionaire hangs his gold bull hat on basic supply-demand fundamentals. As investors of all classes want more gold as a stable currency, miners are depleting their reserves of the precious metal.

Further demand side pressures could come into play if investors wanted to have physical gold in their vaults in place of a certificate that says they own the precious metal.

"What if the 'paper gold' vehicles wanted to take delivery of their futures and the counter party couldn't deliver?" asked Jeffrey Gundlach, founder of DoubleLine Capital.

We are already seeing this at the government level as countries look to bring home gold stored overseas. In mid-May, the central bank of Venezuela filed a lawsuit to force the Bank of England to release $1 billion worth of gold stored in London.

Venezuelan central bank said the central American countries needs "access to its gold reserves at a time of national and global emergency" brought on by the COVID-19 pandemic.

This is on top of Germany, Netherlands, Austria, Poland, and other countries that cashed in their deposit slips and brought home their physical gold that was in vaults in New York, London, and Paris.

Unlike fiat currencies, which can be "printed" by central banks to stimulate economies, or oil, which can be pumped into global markets not using it because of a pandemic lockdown, there is no quick and easy way to meet the demands of a world where everyone wants to own gold.

And with lower grade ores driving up the work and costs needed to produce an ounce of gold, diminishing global reserves of the monetary metal, and too few discoveries to replenish those reserves, gold miners must work harder just to maintain current production rates.

And bringing new gold to market – from discovery and resource confirmation, through permitting and development – is a multi-decade process.

"In oil, if you find something and you are near infrastructure, you can be a producer within a matter of months. In gold, if you have a prospect and you identify something, by the time you have taken it up the value chain to where it is a producer, on average it will take 20 to 25 years," Kaplan said. "The chances that you could have new discoveries come into the market, add new supply in ways that would change that dynamic, don't exist."

In a world where more people want gold than mines can supply, a 39-million-oz gold deposit with reserve grades more than double the industry average on privately owned land in America, an asset like Donlin Gold is the Holy Grail for a monetary metals investor like Kaplan.

His mantra is, "The key to success in resources is to acquire category-killer assets that give the greatest leverage to the underlying investment thesis in jurisdictions that will allow one to keep the fruits of that leverage."

Novagold and Barrick Gold Corp., which each hold a 50% joint venture interest in Donlin Gold, have outlined roughly 39 million oz of gold in 541 million metric tons of measured and indicated resources that average 2.24 grams per metric ton.

"Being a gold endowment presently contained within only three kilometers (two miles) of an eight-kilometer (five miles) mineralized belt, and with only a small portion of the mining claims area having been explored, we believe Donlin Gold ultimately could well command district-sized potential," Novagold Resources President Greg Lang penned in the company's annual report.

With enough reserves to support a mine that could churn out more than 1 million oz of gold per year for the better part of three decades, the partners simply have no need to add gold to the resource until a mine is established at this extraordinary deposit.

These landowners are looking forward to a world-class gold mine that will provide jobs and boost the economy of their region. 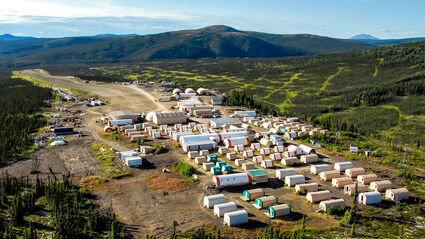 The Donlin Gold camp and airstrip lie alongside the Acma and Lewis deposits, which contain the 39 million ounces of gold that has been identified so far at this world-class mine project.

"Calista supports Donlin Gold because modern mines have a positive track record of environmental protections. It is the brightest economic prospect in our region, with the potential to reduce unemployment and the cost of living in many of our communities," said Calista President and CEO Andrew Guy.

More information on Calista Corp. can be read at Calista sees golden future for SW Alaska in the November 1 edition of North of 60 Mining News.

For Kaplan, the strong relationships Novagold has built within Alaska is another reason Electrum owns 25.8% of Novagold, or nearly 13% of the Donlin Gold project.

"Give me a category-killer asset, with a great management team, in a jurisdiction where the rule of law is not a novelty item – that to me is, simply put, the Holy Grail," he said.