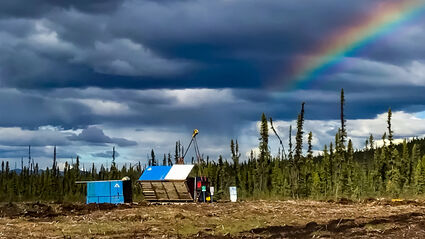 A rig being set up for 2019 gold resource drilling at AurMac.

Banyan Gold Corp. May 25 announced a 903,945-ounce inferred gold resource for AurMac, the new name for the company's combined Aurex ‎and McQuesten properties in the Yukon.

Banyan's drilling over the previous two years has focused on building resources at Airstrip and Powerline. 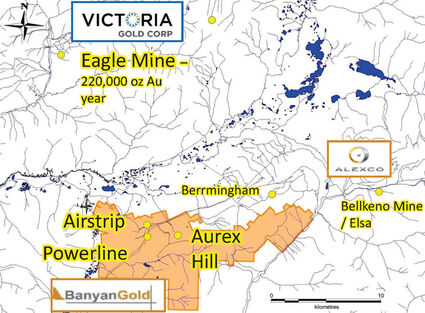 "We are excited with the value this initial Mineral Resource estimate generates for our shareholders, particularly given the modest exploration expenditures by Banyan, generating ounces at less than C$2 per ounce. Both deposits are open, with mineralization known to extend beyond the current block model boundaries," said Banyan Gold President and CEO Tara Christie. "Further, examination of the Airstrip mineral resource model highlights its robust nature; when the cut-off grade is increased by 50%, to 0.3 g/t, less than 15% of the ounces are reduced; while, the grade increases by more than 20% to an average of 0.65 g/t. Additionally, the deposit model exercise has identified a series of drill targets, which we are confident will meaningfully build upon this initial mineral resource."

With roughly C$740,000 in cash, Banyan is funded for further drilling to expand the resource and increase the grade at AurMac this year.