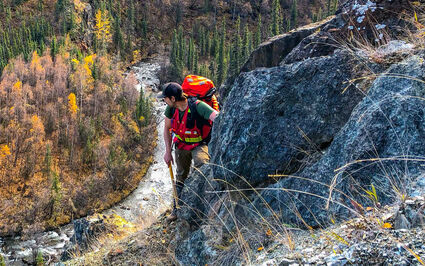 An Alaska Native Claims Settlement Act (ANCSA) regional corporation, Doyon owns 12.5 million acres of land spanning Alaska's Interior, making it the largest private landholder in the state and one of the largest in the nation.

"We are pleased to have the opportunity to bring in significant new institutional investor support to the Tectonic registry on the heels of the strategic investment by Doyon Ltd. The net proceeds from this placement will enable Tectonic to conduct two robust drill programs this year," said Tectonic Metals President and CEO Tony Reda.

One of these drill programs will be carried out at Tibbs, a block of state of Alaska mining claims about 20 miles east of Northern Star Resources Ltd.'s Pogo gold mine property in Alaska's Goodpaster Mining District.

Compiling and reinterpreting data from exploration carried out at Tibbs over the past two decades, Tectonic carried out systematic exploration of some of the most intriguing gold targets at Tibbs last year.

Michigan hosts a roughly 1,000-meter-long northeast-trending deformation zone defined by several mineralized structures, including M1 where the 28.95 meters of 6.03 g/t gold was encountered during this year's drilling.

"We are ecstatic to advance our exploration program at Tibbs after our exciting results from last year's drill program, which included 6.03 g/t gold over 28.95 meters on a newly discovered structure approximately 35 kilometers away from Northern Star's operating Pogo Mine," said Reda. "We are also chomping at the bit to drill test our Seventymile Project, which hosts a 40-kilometer- (25 miles) long underexplored greenstone belt that hasn't seen a drill hole in 20 years despite some very interesting historical work."

Situated between two prolific placer gold mining districts – Yukon's Klondike to the east and Alaska's Circle Mining District to the west – Seventymile is a large land package where previous exploration has shown the potential for multiple gold deposit.

While gold has been identified across the breadth of the property, the 8,000-meter-long Flume trend is one of the most intriguing targets at Seventymile. 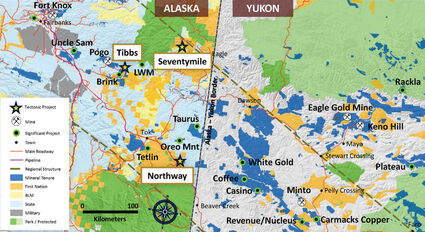 Tectonic will focus its 2020 drilling on a shear zone that is now believed to be a conduit for the mineralization at Flume but was previously overlooked and was not tested by past drilling.

The private placement financing to fund Tectonic's exploration programs, as well as provide the company with general working capital, will involve the issuance of 15 million Tectonic units at C20 cents each. Each unit includes one Tectonic share and half a warrant, with each full warrant allowing the holder to acquire an additional Tectonic share at C$40 cents for two year, subject to certain accelerated expiry conditions.

Closing of this financing is subject to the conditional acceptance of the TSX Venture Exchange.