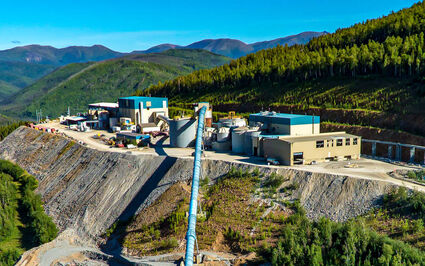 Camp, mill, and other surface facilities at Northern Star Resources' Pogo gold mine in Alaska.

Northern Star Resources Ltd. June 8 reported that its Pogo Mine in Alaska produced 49,353 ounces of gold during the second quarter of 2020, despite several cases of COVID-19 at this operation about 90 miles southeast of Fairbanks.

"The results at our Pogo mine in Alaska were particularly pleasing given the challenging circumstances emanating from COVID-19, where we effectively managed safe operations with 36 confirmed cases through the quarter," said Northern Star Resources Executive Chairman Bill Beament.

The Australian mining company said its business model for Pogo remains well on track as the Alaska operation continues to improve quarter-on-quarter. This includes an increase in gold grades as new mining areas are accessed and ore from long-hole stoping increases.

While the total gold recovered during the three months ending June 30 was only 13 oz higher than the previous quarter, this aurum was recovered from less ore at higher grades. During the June quarter, the Pogo mine milled 203,084 metric tons of ore averaging 8.5 grams per metric ton gold, compared to 208,306 metric tons at 8.2 g/t gold during the three months ending March 31. The mill recovered 89% of the gold in the ore during both quarters.

The company expected to mine about 20% more ore during the June quarter but the impacts from COVID-19 slowed mining.

"Despite the considerable impacts of COVID-19 at Pogo, the underlying trend of rising production and productivity continued," said Beament. "This further demonstrates the huge potential of this asset in more conventional circumstances."

So far in 2020, the Pogo Mine has produced 98,693 oz of gold. Northern Star anticipates increased gold output from its Alaska operation in the coming quarters as grades continue to improve and mining volumes increase.

CORRECTION: An earlier version of this article stated the Pogo Mine produced 49,353 ounces of gold during the "first three months" of 2020, and has been corrected to "the second quarter", the correct time period for the gold production.