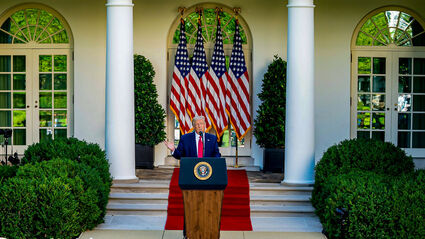 President Trump and his administration have finalized sweeping reforms to modernize and streamline the National Environmental Policy Act permitting process.

In a move aimed at modernizing and streamlining the environmental review process for large-scale projects in the United States, the Trump administration has finalized sweeping reforms to the National Environmental Policy Act.

When it was established in 1970, NEPA was hailed by U.S. policymakers as "the most important environmental statute ever enacted" but was largely viewed by law professionals as lacking any kind of detail that could be considered statute.

Theodore Lowi, a professor of government at Cornell University, in his 1971 book The Politics of Disorder noted that "NEPA states a whole lot of lofty sentiments . . . but there is no law to be found anywhere in the act."

It was another eight years before the Council on Environmental Quality rectified this lack of NEPA statute.

"In 1978, the CEQ promulgated a comprehensive set of regulations governing federal agency implementation of NEPA which largely codified federal decisions in the statute's first eight years. CEQ has issued numerous guidance documents on statutory implementation since 1978 but has made only limited modifications to its NEPA rules," explains Thaddeus Lightfoot, a partner at the international law firm Dorsey & Whitney who has spent almost three decades specializing in environmental law.

After reading the entire 301 pages of new rules, Lightfoot said the Trump administration has made "substantial and substantive modifications" to virtually every NEPA rule.

"Many of the modifications will improve a NEPA environmental review process that often takes too long and costs too much," the environmental attorney said.

This was one of the primary goals of President Trump, who says the environmental review process has been burdensome for both federal agencies conducting reviews and Americans seeking permits or approvals.

Mines, roads, and other large projects that fall under NEPA take more than seven years on average to get final federal approvals and often take a decade or more.

"Where NEPA review of a single project involves multiple agencies, which is common for larger projects with a number of environmental permits and approvals, the new rules require federal agencies to establish joint schedules, prepare a single EIS, and issue a single record of decision approving the EIS, where appropriate," said Lightfoot.

A joint record of decision issued by the U.S. Army Corps of Engineers and Bureau of Land Management for the Donlin Gold mine in Alaska marked the first project to be approved under a Trump executive order outlining "One Federal Decision." This joint decision, however, came after roughly seven years of federal permitting under NEPA.

The new rules would also limit the number of pages an EIS can be, with exceptions for extremely complex projects. The White House says current EISs weigh in at an average of more than 650 pages.

By clarifying NEPA's applications and expanding public involvement through the use of modern technology, the Trump administration says its reforms "will slash unnecessary government bureaucracy and accelerate important infrastructure projects all across the nation."

Lightfoot, however, cautions that there are a couple provisions in the new rule that seem to undermine NEPA and are likely to be challenged in courts.

The most significant change in the CEQ rules is the modification of the definition of the term "effects", which the environmental attorney says "appears to be an attempt to narrow the scope of NEPA analysis and potentially eliminates the need to assess climate change in NEPA reviews."

The other controversial provision noted by Lightfoot has to do with defining "major federal action," which is a trigger to whether NEPA applies to a project but was not clearly defined in statute.

"The new rule attempts to resolve the issue by stating NEPA does not apply where a federal agency's role involves 'minimal' federal funding or control," said Lightfoot.

This seems to shift the NEPA trigger from a project's degree of environmental effects to what level the federal government is involved in funding or developing the project.

Given the sweeping changes, Lightfoot said the new NEPA rules will be challenged in courts, but any litigant has some high hurdles to overcome.

"To prevail in a challenge of the new CEQ rules, litigants will have to establish the changes are inconsistent with a law forcing federal agencies to alter environmental review such that it no longer meets the a statute that Professor Lowi described as having 'no law to be found anywhere in the act.'" he says.