Trump to hear both sides of Pebble Mine 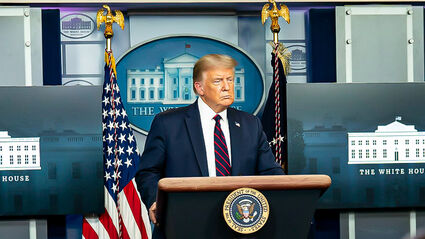 President Trump said he will listen to both sides of the argument on developing a mine at the Pebble copper-gold project in Alaska during an Aug. 5 White House press briefing.

President Trump is expecting to be briefed on the proposed Pebble Mine and on Wednesday told reporters that he will "listen to both sides" of the world-class copper-gold-molybdenum project in the Bristol Bay region of Southwest Alaska.

Pebble Partnership CEO Tom Collier said he welcomes a White House review of a final Environmental Impact Statement that details a mine at Pebble capable of extracting copper, gold, and other valuable metals found there without harming the Bristol Bay salmon fishery.

"Quite frankly, I wouldn't expect anything less when it comes to a project of Pebble's import to our state and our country," he said.

Pebble rising to a White House level of review comes less than two weeks after the U.S. Army Corps of Engineers, the lead federal regulator for permitting the Pebble Mine under the National Environmental Policy Act, published the final EIS.

"As the President begins his look at Pebble, he's going to find the USACE has just completed an intensive 2.5-year scientific review involving eight federal agencies, three state agencies, local government and federally recognized tribes. Over 2,000 pages, plus appendices, the Final EIS provides an irrefutable scientific and administrative record that finds Pebble is a project of merit that will do no harm to Bristol Bay fish populations, and will fully coexist with thriving commercial, subsistence and sport fisheries," Collier said.

Donald Trump, Jr., however, hopes his father will weigh in against the proposed mine ahead of a final permitting decision by the Army Corps, known as a record of decision, expected later this year.

"The headwaters of Bristol Bay and the surrounding fishery are too unique and fragile to take any chances with," Trump Jr., an avid sportsman, tweeted earlier this week.

This comment by the younger Trump prompted a reporter to ask the President where he stood on Trump Jr.'s suggestion his administration should reject the Pebble Mine.

"I don't know of the argument yet but, but I would certainly listen to both sides, my son has very strong opinions, and he is very much an environmentalist," President Trump answered.

Pebble Partnership, an Alaska-based company formed to advance Pebble through permitting and to operations, believes that the President will weigh in on the side of allowing the project to be judged under the National Environmental Policy Act, or NEPA, the foundation of federal environmental permitting in the United States.

"All of President Trump's recent permitting reform announcements rest on a bedrock principle – the precept of the 'rule of law' – that permitting processes must be allowed to operate free of political interference. It is absolutely essential to encouraging investment in major projects in America," said Collier. "In Pebble's case, we've invested nearly $1 billion in getting to this point in the federal permitting process. Every other major project developer and investor in the world is watching whether this administration delivers on its promise to eliminate political influence from permitting."

Both sides of Pebble

Opponents of the Pebble Mine agree with Trump Jr., Bristol Bay's world-class fishery is "too unique and fragile to take any chances with."

A thorough analysis by the Army Corps, however, found that "impacts to Bristol Bay salmon are not expected to be measurable."

Despite this study being supported by US$150 million of environmental studies completed for the project over a span of more than 15 years, Pebble opponents argue that the EIS process was rushed and inadequate.

"The Army Corps has failed to take a hard look at the damage (Pebble) will do in Bristol Bay," said Bristol Bay Native Association CEO Ralph Andersen.

Supporters of the proposed mine, however, believe the EIS process was thorough and fair, and look forward to the benefits Pebble could bring to Alaska and the nation.

"As all of us look for ways to get our economy back on solid ground, we cannot afford to have selective or political interference in the permitting process," said Alaska Chamber of Commerce President and CEO Kati Capozzi.

The project Pebble Partnership submitted for permitting under NEPA would produce an average of 318 million pounds of copper, 362,000 ounces of gold, 14 million lb of molybdenum, and 1.8 million oz of silver a year over a 20-year mine life.

This would make Pebble America's third largest producer of copper, a metal needed in much larger quantities for the electric vehicles, solar and wind power installations, and energy infrastructure required to transition the U.S. towards renewable energy. 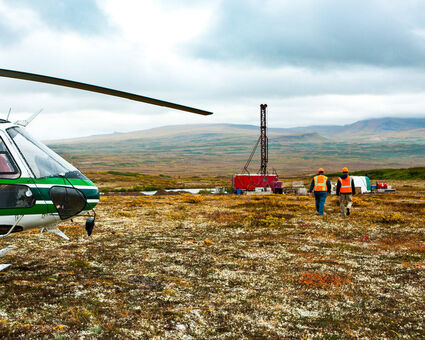 Pebble Partnership has invested nearly US$1 billion on exploration, environmental and engineering studies at Pebble, a world-class copper-gold-molybdenum deposit about 100 miles northwest of Bristol Bay.

In addition to the metals and economic benefits on a national level, if developed, a mine at Pebble would generate billions of dollars of government revenue and billions more in economic activity to Alaska, a state that is dealing with a budget crises made worse by the COVID-19 pandemic and low oil prices.

"Alaska has enjoyed the benefits of mining for well over 100 years, with the last several decades seeing new innovations and advancements for protecting the environment," said Alaska Support Industry Alliance CEO Rebecca Logan. "As our resource revenues continue to decline and our state faces serious budget challenges, Pebble could be the first step to turn the state around."

Proclaiming a love for Alaska, President Trump said he will look into both sides of the Pebble argument.

"We have done a lot for Alaska, it's a special place, and I'll take a look at that (Pebble) – it's interesting," he told reporters on Aug. 5.