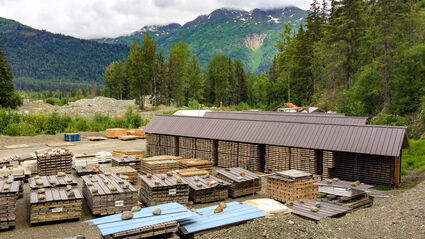 This storage facility for core from Constantine's drilling at the Palmer VMS deposits is built on tailings from placer gold mining in the Porcupine Creek district.

The Palmer property, however, also covers the Porcupine Creek area, one of the most important placer districts in Southeast Alaska.

"After the successful spinout of the company's gold assets into HighGold Mining Inc. last year, the company has made a decision to evaluate new opportunities for gold in addition to its flagship massive sulfide base metal Palmer project," said Constantine Metal Resources President and CEO Garfield MacVeigh. "We have identified several key gold prospects on our 100% leased lands."

Gold was discovered in the Porcupine Creek area in 1898 by prospectors working as supply packers on the Dalton trail, an alternative route to the Klondike goldfields from the more famous Chilkoot and White passes. The Porcupine Creek area was the site of considerable placer mining activity between 1898 and 1936 with small operations still active in the area today.

Rock sampling by the United States Bureau of Mines at the Golden Eagle gold prospect in the 1980s returned assays with as much as 531.1 g/t gold from the Vug vein. Rock sampling downstream of the Vug vein toward the placer mining areas returned grades as high as 182.13 g/t.

Bureau of Mines geologists also collected samples with 1.37 to 8.96 g/t gold from discontinuous veins at McKinley Creek Falls. A 0.76-meter chip sample at this prospect averaged 24.83 g/t gold and 280 parts per million zinc.

There has been no modern, systematic exploration of the gold prospects and the upstream source of the Porcupine placer gold deposits remain untested.

Although the rocks cannot be correlated directly, Constantine said the geological environment of the gold prospects have similarities with the Alaska Juneau (AJ) Mine in Juneau that yielded 3.5 million oz of gold and 2.2 million oz of silver from the late 1800s until the mine closed in 1944. 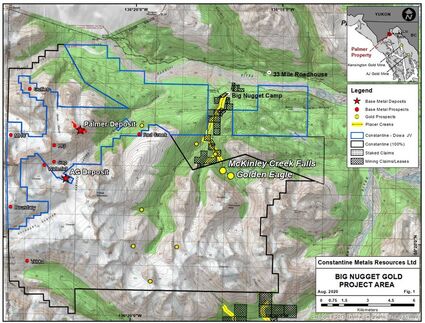 "The prospects, as described in historical government reports, have many occurrences of high-grade gold that have received very limited investigation for their economic potential, in a geological environment with similarities to the large, past producing Alaska Juneau Mine in Juneau, Alaska, located 160 kilometers (100 miles) to the south-southeast of Palmer," said MacVeigh. "We look forward to evaluating these previously untested areas of prospective high-grade gold mineralization."

During this summer's planned field program, Constantine geologists will re-sample the gold prospects and evaluate the geological setting of the gold mineralization. The work will be supported with prospecting, soil sampling and trenching to define targets for drilling.