BC funds start of Tulsequah Mine clean-up 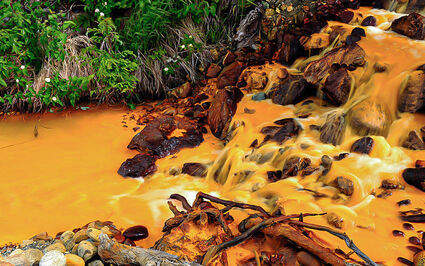 Metal-laden waters draining from the past producing Tulsequah Chief Mine in northwestern British Columbia.

British Columbia has committed to invest up to C$1.575 million (US$1.2 million) for site preparation and studies to support early reclamation work at Tulsequah Chief, a historical mine site in western British Columbia that has been seeping acidic metal-laden water since the mine closed in 1957.

This legacy acid rock drainage – which was reaching the Tulsequah River, a tributary of the Taku River that flows into the Lynn Canal near Juneau – has been a concern for First Nations, regulators, and others in both British Columbia and Alaska.

For more than a year, provincial officials have been working with the Taku River Tlingit First Nation, whose traditional territory spans the BC-Alaska border, to support the development of a conceptual closure and reclamation plan for the Tulsequah Chief Mine.

"The environmental issues at the Tulsequah Chief Mine site have gone on for too long," said BC Minister of Energy, Mines and Petroleum Resources Bruce Ralston. "But after working in partnership with the Taku River Tlingit First Nation and the government of Alaska, I am pleased to see we now have a plan in place and can get to work on reclaiming the site."

The funding allotted by the province will allow for multiple critical activities to take place this summer.

Some of the first steps include replacing and repairing bridges, upgrading the access road, establishing an erosion protection berm, and repairing the existing airstrip. This work is required to prepare the site in order to address environmental, health and safety issues and undertake the long-term remediation.

"One of the benefits of the work on the reclamation plan is safeguarding the salmon, and the joint effort with the province has been key to reaching this stage of a plan," said John Ward, spokesperson for TRFN. "An integral part of the approach of the Taku River Tlingit First Nation is a responsible approach to industrial development. Future mining in the Taku River Tlingit First Nation territory is supported if it's a responsible and sustainable approach that's brought to the development."

The province and TRTFN will work together to contract a light detection and ranging sensor survey. The survey will get topographic information that is detailed enough to support further design work. It will also initiate a multi-year aquatics monitoring program and assess the potential short-term use of an interim water treatment plant already at site. Data provided by these efforts will be crucial to filling information gaps and determining next steps at the site, including remedial timelines.

"Taking action now is critical in order to begin to address the impacts of the former Tulsequah Chief Mine," said BC Minister of Environment and Climate Change Strategy George Heyman. "Over the past year, we have been working closely with the Taku River Tlingit First Nation and the government of Alaska to identify the right actions to properly remediate and close the site. This work will also create jobs, build capacity in the community and strengthen partnerships to manage the health of our shared waterways."

The closure and reclamation plan outlines a phased approach that involves a series of steps designed to reduce the ongoing contamination. It is designed to be flexible, so changes can be made once more information is gathered from the site.

BC said it is committed to ongoing collaboration with TRFN and engagement with Alaska in these efforts, while also fostering a well-regulated, sustainable, and word-class mining industry that provides opportunities for all British Columbians.