A look at Kinross Gold Corp.'s newly optimized strategy for Fort Knox indicates that the iconic mine about 20 miles north of Fairbanks, Alaska will be producing upwards of 400,000 ounces of gold per year for most of the coming decade.

The global gold producer introduced its new plans for Fort Knox during an Oct. 20 presentation that provided a more in-depth look into its plan to increase companywide gold output by 500,000 oz/year by 2023.

This production growth strategy, first mentioned by Kinross management in September, is forecast to boost the company's annual gold output from 2.4 million oz this year to 2.7 million oz in 2022 and 2.9 million oz in 2023.

Kinross Gold Chief Technical Officer Paul Tomory said the Fort Knox mine will be the second largest contributor to the added gold the Toronto-based miner expects to produce in the coming years.

"Things are looking good for us at Fort Knox and we are happy with the operating performance," said Tomory.

An optimized plan for the Gilmore expansion at Fort Knox, a greatly improved strategy utilizing the operation's mill and tailings storage capacity, and the mining of satellite deposit across the wider property are all contributing to a major increase in annual gold production over the next three years.

And the Interior Alaska gold mine's production may keep climbing after this initial stage of optimization.

This is due to the fact that about the time this three-year strategy comes to close, the first truckloads of much higher grade ore from Peak Gold is slated to be delivered to the mill at Fort Knox – contributing an estimated average of around 222,000 oz/year to mill production for at least another 4.5 years.

In the meantime, the Kinross team will seek out more Alaska projects to deliver ore to the Fort Knox mill.

"We see a great future ahead for Kinross and we expect our continuous improvement culture will continue to provide opportunities to extend mine life and optimize mine plans," Brans said. "It has also led to a shift in thinking: It is no longer just 'Kinross Fort Knox'; it is 'Kinross Alaska...with Fort Knox at its heart'."

A greatly improved strategy for the utilization of the mill and increased tailings storage capacity at Fort Knox is the key to Kinross' near- and longer-term growth plans for the mine.

The global gold producer has invested very heavily in dewatering the current tailings storage facility and has gained permits to begin stacking tailings in the open-pit that has been providing ore to the operation for the past 25 years.

This greatly expands the room to store tailings from milling higher grade ores, a previous limitation that contributed to plans to wind down mill operations by next year.

"We are now viewing this asset as having a very substantial capacity for future mill production," said Tomory.

With this substantial capacity, the company can now consider feeding higher grade ore from Gilmore, an expansion project that lies immediately west of the deposit that has produced more than 8 million oz of gold.

This production profile, however, is expected to change as Kinross has indicated its Gilmore optimization includes recovering more ounces earlier in the mine plan.

While the bulk of this ore is still expected to be stacked on the Barnes Creek Heap Leach Facility, which was completed at the end of September, more higher grade material mined from Gilmore will likely be fed to the mill.

According to the most recent calculation published by Kinross, Gil-Sourdough hosts 29.5 million metric tons of indicated resource averaging 0.56 g/t (533,000) oz. of gold.

The company, however, does not plan to mine the entire resource– at least not immediately. Instead, the Gil-Sourdough development plan is expected to start with mining roughly 10 million metric tons of the indicated resources from smaller pits at an average mined grade of 0.60 g/t gold, or roughly 193,000 oz of gold.

Permitting is underway and Kinross anticipates delivering the first Gil-Sourdough ore to the Fort Knox mill by the end of next year.

Kinross geologists are also finding expansions of the original Fort Knox deposit that may deliver future gold to the operation. This includes Northwest Bulge, an expansion of the current pit that with 600,000 oz of gold in the indicated resource category that could extend mining into the early 2030s.

"The Northwest Bulge is the perfect example of where we are chasing the mineralization, structurally controlled, out of the pit," said John Simms, the senior vice president of resource geology and brownsfield exploration at Kinross Gold.

Kinross' recent acquisition of a 70% stake in the Peak Gold project, however, unveils the company's long-term strategy for Fort Knox – a centralized mill that could process gold ore from projects across much of Alaska.

In addition to the newly increased tailings capacity at Fort Knox, Tomory said the 14-million-metric-ton-per-year mill capacity at Fort Knox is being vastly underutilized. With plenty of excess capability at both ends of the operation, Kinross is looking for sources of high-grade gold ore along Alaska's road system.

"There is an economic radius around Fort Knox given the mill capacity that makes a good chunk of Alaska attractive for potential bolt-on," said Tomory.

It was this spare capacity, and ore grades nearly 10-times the Fort Knox average that made Peak Gold such an attractive acquisition target for Kinross.

Kinross currently anticipates that the deposit will produce roughly 1 million oz gold-equivalent, which accounts for the value of the gold and silver, from ore that averages 6 g/t gold. 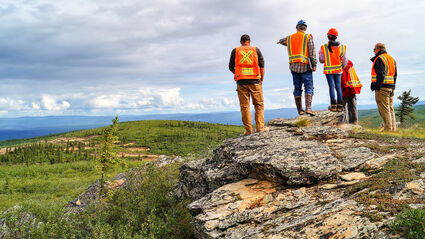 Overlooking the Peak Gold deposits that are expected to deliver high-grade ore to the Fort Knox mill beginning in 2024.

"This will give a very substantial lift to production for four-and-a-half years," said Tomory.

Further details on Kinross' agreement to acquire a 70% interest in the Peak Gold project and plans to advance mining in partnership with Contango ORE can be read at Kinross cuts deal for Alaskan Peak Gold in the October 2 edition of North of 60 Mining News.