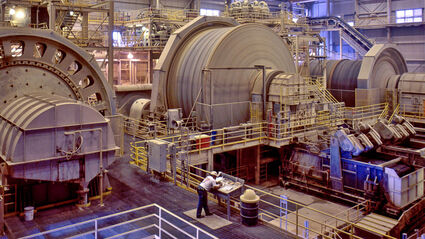 Under its new operating strategy, Kinross is looking to acquire smaller Alaskan gold projects that can deliver high-grade ore to its 14-million-metric-ton-per-year mill at Fort Knox.

Kinross Gold Corp.'s new long-term strategy for its Fort Knox Mine is a paradigm shift for mineral exploration companies with gold projects on or near the road system within a 300-mile-radius of the iconic gold operation about 20 miles north of Fairbanks, Alaska.

Under this new operating plan, Kinross is looking for Alaskan projects that can deliver high-grade ore to the underutilized 14-million-metric-ton-per-year mill at Fort Knox.

"There is an economic radius around Fort Knox given the mill capacity that makes a good chunk of Alaska attractive for potential bolt-on," said Kinross Gold Chief Technical Officer Paul Tomory.

Peak Gold, a project Kinross recently acquired a 70% interest in and is planning to develop in partnership with Contango ORE Inc., is currently seen as the first bolt-on operation to deliver high-grade gold ore to Fort Knox.

Based on this resource, Kinross expects to produce 1 million gold-equivalent oz, which includes the value of both the gold and silver recovered, from Peak Gold ore over an initial 4.5-year mine life, or roughly 222,000 oz per year.

Kinross' search for more similar higher grade ore to feed the Fort Knox mill shifts the economic and development dynamics of dozens of projects on or near roads and potentially even along rivers across much of Alaska.

Or, as Fort Knox General Manager Jeremy Brans put it, "It is no longer just 'Kinross Fort Knox'; it is 'Kinross Alaska...with Fort Knox at its heart'."

Without the need to outline a project large enough to support the time and money investment to build gold recovery and tailings disposal system, Kinross Alaska will change how gold exploration companies evaluate and explore road, rail or river accessible assets within Fort Knox' economic radius.

When considering projects that would benefit from the Kinross Alaska strategy, Freegold Ventures Ltd.'s Golden Summit property adjacent to the north side of the Fort Knox property is a potential nearby source of mill grade ore.

While this is roughly the same grade as the ore currently being fed into the mill at Fort Knox, Kinross would likely be looking for higher grades from third-party projects, even ones as close as Golden Summit, which is about five miles from the mill.

Fortunately for Freegold, and potential Kinross Alaska, a much higher-grade component to Golden Summit has begun to emerge.

In March, Freegold launched a drill program targeting higher grade gold mineralization near the historic Cleary Hill Mine, which produced 281,000 ounces of gold from ore averaging 1.3 oz per ton before the operation was shuttered during World War II.

Based on Freegold's previous work, it is interpreted that higher-grade gold mineralization may extend to the west and to depth from the historic mine workings toward the Dolphin intrusive, which hosts the bulk tonnage resource at Golden Summit.

While the bonanza-grade intercept caught a lot of attention, the nearly 190 meters of 3.7 g/t could quickly build a significant resource.

While Freegold got off to a quick and exciting start to 2020 exploration, the COVID-19 pandemic interrupted drilling about mid-way through the second hole and has slowed the return of results from the assay labs since the June restart.

Assays are pending from nine additional holes drilled this year.

Freegold has recently added a third rig to an expanded Golden Summit drill program that will continue through winter and into 2021. Results from this drilling are expected to be incorporated into an updated resource next year.

Golden Summit is not the only project bordering Fort Knox with the potential of delivering higher grade ore to the mill.

Drilling and trenching on Amanita has identified mill grade ore within the Tonsina Trend, a structural corridor that extends northeast onto the Fort Knox property.

Highlights from previous drilling along the Amanita portion of the Tonsina Trend include:

Avidian's 2019 work program at Amanita focused on sampling the Tonsina Trend with a series of widely spaced trenches along a 3,000-meter section of the corridor.

Highlights from the trenching include:

Avidian said these trench results, combined with the historical drilling, highlight the wide distribution of oxide gold mineralization with significant widths and grades.

The 2020 program at Amanita included lidar and geophysical surveys, sampling of newly discovered mineralization, and drilling. Assays are pending from the drilling and sampling.

The company is also carrying out preliminary exploration at its recently acquired Fish Creek, which has been renamed Amanita NE, project.

One of the things that makes Amanita NE interesting is it lies between Gil-Sourdough, a deposit Kinross recently announced it plans to begin mining next year, and the Fort Knox mill.

Avidian has significantly upgraded the existing dataset at Amanita NE in preparation for a drill program anticipated in the first half of 2021.

"Our plan was always to explore the Amanita NE project in early 2021 so our timing will be perfect as we drive value into this project as the spotlight turns to the Gil projects expected development," Avidian Gold President Steve Roebuck penned in a recent email.

While much further away, Avidian's more advanced Golden Zone property about 200 miles south of Fort Knox may be a more immediate source of ore for the Kinross Alaska mill.

Situated just 10 miles west of the Parks Highway, the primary route between Anchorage to Fairbanks, the Golden Zone property hosts numerous gold targets along a 15,000-meter-long trend. Breccia Pipe, the most advanced of these, is a deposit with 4.19 million metric tons of indicated resource averaging 1.99 g/t (267,400 oz) gold and 10.4 g/t (1.4 million oz) silver.

While not particularly high-grade, the Golden Zone deposit lies within 10 miles of the Alaska Railroad, providing low-cost rail transport to within about 25 miles of the Fort Knox mill.

When it comes to projects along Alaska's rail system that could deliver ore to the Fort Knox mill, Millrock Resources Inc.'s Liberty Bell project about 70 miles south of Fairbanks is one that might fit the bill.

The interesting thing about Liberty Bell is geologists familiar with this project and Peak Gold say the mineralization at these two projects are nearly identical. And historical exploration has shown the property's potential for high-grade gold.

Kinross took a preliminary look at Liberty Bell a couple of years ago but did not follow up with more extensive mineralization.

If a deposit with the size, grade, and metallurgy to provide feed to the Kinross Alaska mill, the Liberty Bell property has the advantage of lying alongside the Alaska Railroad system.

Millrock also has the option to acquire two promising gold projects much closer to the Fort Knox mill – Treasure Creek and Ester Dome.

Treasure Creek is a roughly 34,600-acre highly prospective gold exploration property about 20 miles west of Fort Knox. According to Alaska Division of Geological and Geophysical Survey reports more than 148,000 oz of placer gold has been mined from the streams draining the Treasure Creek claim block.

Much like Treasure Creek, major placer gold producing streams drain the Ester Dome property about 25 miles southwest of the Fort Knox Mine.

"There is known gold mineralization on both claim blocks and the geology is similar to that present at the nearby Fort Knox gold mine operated by Kinross," said Millrock Resources President and CEO Greg Beischer. "The abundance of placer gold mined at surface underscores the potential we see to discover a large intrusion-related gold deposit of similar scale to Fort Knox. High-grade vein deposits are also a possibility. A recent drill intersection by Freegold Ventures Ltd. at the nearby Golden Summit project has reinvigorated interest in this great gold mining camp."

Both properties have shown strong potential for the intrusion-related gold Millrock seeks and the company is looking for partners to see if there are deposits worthy of delivering ore to the Kinross Alaska mill or developing as standalone operations.

"We will advance the two new projects with some surface exploration in the near term and look to bring in a partner as drill targets are firmed up," Beischer said earlier this year.

The potential to deliver ore to an already established mill also changes the dynamics of numerous projects lying along the Alaska Highway between Fairbanks and Peak Gold.

One such project that has flown under the radar in recent years is Richardson, an enormous gold exploration property alongside the Alaska highway about 70 miles southeast of Fairbanks.

A 70,000-ton bulk sample collected from the Democratic pit at Richardson in 1988 was reported to produce more than 2,000 oz of gold.

Another sample collected about 60 meters away returned 2.57 g/t gold and 39.3 g/t silver across six meters.

"Richardson is one of the few gold exploration properties in Alaska which is road accessible, bound on two sides by high transmission power lines, located in an mining friendly jurisdiction, and host to multiple, large gold footprints," Northern Empire Chairman John Robins said in 2015.

The Goodpaster District just east of Richardson has attracted a lot of attention over the past couple of years. Millrock, Tectonic Metals Inc. and Northway Resources Corp. are among the companies exploring promising gold projects in the district.

While these projects have previously been considered as potential acquisition projects for Northern Star Resources Ltd., which operates the Pogo Mine in the Goodpaster District, the projects that tend to be high-grade could potentially deliver ore to the Kinross Alaska mill.

Located about 20 miles west of the Alaska Highway town of Tok, the Tushtena project hosts gold grades that might attract the attention of Kinross Alaska. 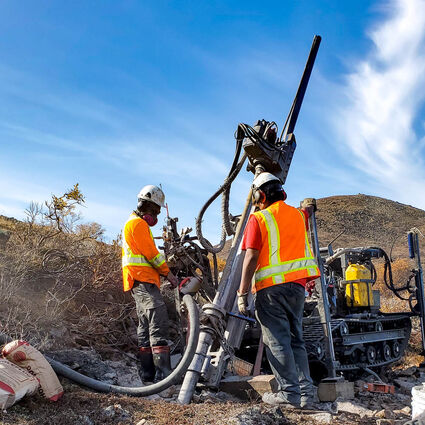 Tectonic Metals' Tibbs project in the Goodpaster District could offer a future source of ore for the Kinross Alaska mill.

Rock chip sampling completed by Triton Gold in 2010 returned grades as high as 1,450 g/t gold in the Discovery zone and 163 g/t gold at the RS zone. The company also reported coherent areas of greater than 1g/t gold in soils occur within a target zone at Tushtena that extends more than 3,000 meters.

With Kinross considering purchasing "other small mine prospects in Alaska" to feed its hungry mill at Fort Knox, the exploration of these and many other projects across the state could very well shift from finding deposits large enough to support a standalone mine to smaller high-grade deposits that could match the model that has been set with the global mining company's purchase of a stake in Peak Gold.