Snowfield offers synergies to world-class BC mine project North of 60 Mining News – December 7, 2020 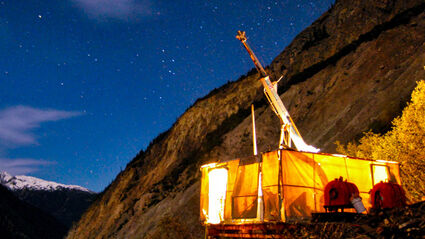 A drill expands the world-class gold-copper deposits at KSM, which lies immediately west of the Snowfield property Seabridge Gold is acquiring from Pretium Resources.

Seabridge Gold Inc. has added 25.9 million ounces of gold to its 49.7 million oz of gold in measured and indicated resources at its already world-class KSM project in British Columbia's Golden Triangle.

This 52% increase in gold resources is the result of an agreement to acquire the Snowfield property on the east border of the KSM property from Pretium Resources Inc.

In a deal announced on Dec. 4, Seabridge will pay Pretium US$100 million for Snowfield, plus a contingent payment of US$20 million that would be paid within six months of commercial production from Snowfield or a bankable feasibility study for the property. US$15 million of this conditional payment will be offset against amounts paid on a 1.5% net smelter return royalty Pretium retained on the Snowfield property.

For Pretium, which operates the Brucejack gold mine on an adjacent property, this cash infusion will help lower the US$198 million balance on its revolving credit.

"This transaction provides us the opportunity to immediately realize the value of Snowfield, an undeveloped asset that we believe is not reflected in our share price," said Pretium Resources CEO Jacques Perron. "The cash proceeds will significantly strengthen our balance sheet and allow us to reduce our debt while the royalty will provide long-term participation in the progress of Snowfield."

For Seabridge, Snowfield offers a new near-surface deposit that could improve the overall economics of developing a mine at KSM.

"This acquisition brings Seabridge a number of major benefits," said Seabridge Chairman and CEO Rudi Fronk. "First, it adds appreciably to our ounces of gold per share, our most important measure of shareholder value, at a cost of approximately US$3 per oz. Second, Snowfield's measured and indicated mineral resources have the potential to significantly increase KSM's proven and probable reserves."

Much like the related deposits outlined at KSM, Snowfield has more than just gold to offer future reserves.

World-class in its own right, the Snowfield resource is only about half the size of KSM.

"Work is already underway to determine how to integrate Snowfield into a new KSM mine plan," said Fronk. "We expect a large portion of the Snowfield mineral resource could be exploited in a combined operation, which could potentially improve KSM's IRR (internal rate of return) and NPV (net present value) projections as well as shortening the payback period of initial capital." 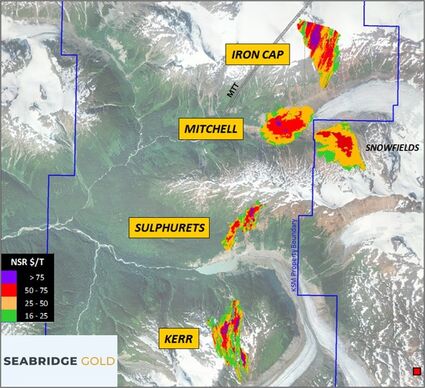 This PFS considered mining the near surface resources in the early years and then transitioning to block cave mining of the large underground resources at KSM. With its proximity to the Mitchell open-pit and with a strip ratio of less than one-to-one, Snowfield has the potential to enhance this plan.

"Our current environmental approvals include haul roads through the Snowfield property, which may allow us to expedite its development and access some of its best grade material early in the mining process. The next step is to generate additional data that is necessary to complete a new preliminary feasibility study for the KSM project, which includes the Snowfield property," said Fronk. "We believe this new PFS will increase project reserves and improve capital efficiency by extending the life of open pit mining, thereby allowing us to delay the capital-intensive development of underground mining later in the project life."