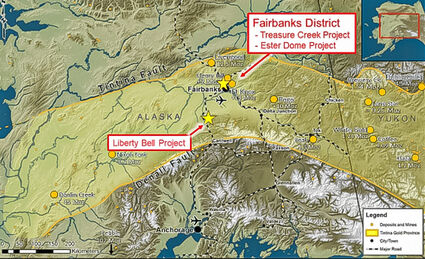 Millrock Resources President and CEO Greg Beischer said the team behind Felix Gold are well respected for their technical expertise and the respect of the financial groups in Australia.

"It is a private company, but they decided they would spin out a brand new Australian Securities Exchange listed company and put our assets into that company," he said during an interview with Gerardo Del Real. "They will do an initial public offering or IPO within the next couple of months."

The name of the new company is a tip of the hat to the Italian prospector who first discovered placer gold in the streams of the Fairbanks Mining District, an area that will be the initial focus of the Australian explorer.

"The new company, Felix Gold, of which Millrock will become a significant shareholder, is named after Felix Pedroni, the prospector credited with the initial discovery of gold in Fairbanks in 1902," said Beischer.

The assets going into Felix Gold are near the Interior Alaska city that sprang up as a result of Pedro's discovery.

Much like Treasure Creek, major placer gold producing streams drain the Ester Dome property about 20 miles (32 kilometers) southwest of the Fort Knox Mine. Numerous lode prospects have been discovered on Ester Dome, including the claims staked and optioned by Millrock.

Located about 70 miles (115 kilometers) southwest of Fairbanks, Liberty Bell has shown the potential for bulk tonnage intrusion related gold similar to Fort Knox and high-grade skarn mineralization reminiscent of Peak Gold, an eastern Alaska project being slated to deliver ore to the Fort Knox mill in 2024.

Information on a recent strategy by Kinross to source ore to feed the Fort Knox mill from satellite projects can be read at Kinross Alaska seeking gold across state in the October 30 edition of North of 60 Mining News.

Millrock says extensive soil anomalies are present in areas of the Liberty Bell property with shallow overburden. Thick gravels obscure bedrock in other areas that have interesting geophysical signatures.

Millrock is transferring ownership of the three properties to Felix Gold in exchange for a share position in the new company and US$210,000 in cash.

Upon Felix Gold's successful listing and Australia Securities Exchange approval, Millrock will vest with roughly a 10% share ownership of the Australia-based explorer, dependent on the final capital raising amount.

"After they've raised at least US$7 million that would be destined primarily for Millrock's three projects, we, Millrock will become a 10% shareholder of this brand new, well-funded company," Millrock elaborated in his interview with Del Real.

In addition, Millrock will retain a 1.5% net smelter return royalty on Ester Dome, and 2% NSR royalties on Treasure Creek and Liberty Bell.

Felix Gold and Millrock technical teams will also work together under a strategic alliance to generate further projects in the Fairbanks District. Felix Gold will contribute a minimum of US$250,000 annually for this work and future property acquisitions. Mineral rights acquired under strategic alliance efforts will be subject to a 1% NSR production royalty in favor of Millrock.

Felix Gold will be engaging Millrock through a services agreement to provide staff, infrastructure, and equipment.

"We are very pleased with this development," said Beischer. "Millrock envisions a systematic, concerted, and sustained exploration effort in the Fairbanks Gold District with numerous drilling programs in the years to come."

This includes planned drilling on the Treasure Creek and Liberty Bell projects this summer.

"We look forward to our collaboration with Felix Gold and making new gold discoveries in this resurging, under-explored gold camp," the Millrock Resources CEO added.