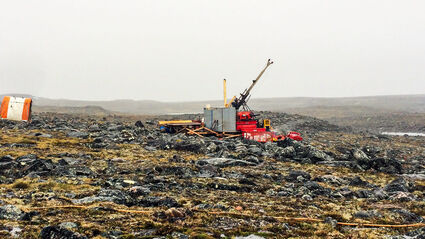 Fury plans to complete up to 10,000 meters of resource expansion and exploration drilling during its 2021 program at the Committee Bay gold project in Nunavut.

Three Bluffs, the most advanced target at Committee Bay, lies at the center of this massive greenstone belt.

"Shareholders are uniquely positioned in Nunavut with the Committee Bay project, which is considered to be one of the largest unexplored greenstone belts remaining in North America," said Fury Gold Mines President and CEO Mike Timmins. "We will be initiating Fury's first drill program at the project with a robust initial resource, several mature high-grade exploration targets and an experienced team with the skill sets to deliver on our growth plans."

• Expand the Three Bluffs deposit through the drilling of a major conductor down-dip from a high-grade portion of the resource.

The exact scope of this program is largely dependent on limitations posed by COVID-19 restrictions during the summer exploration season.

Fury says the high-grade gold at Three Bluffs is associated with high conductivity geophysical responses due to the intense sulfidation associated with the mineralization.

Fury plans to drill across the entire conductivity body to demonstrate the potential for resource growth at Three Bluffs.

Drilling at Raven will focus on demonstrating the expansion potential of this early staged prospect.

So far, systematic exploration has been carried out over 1,200 meters of the 8,000-meter shear zone identified at Raven. This work includes the collection of 207 rock samples with values greater than 5 g/t gold, including one rock with 143 g/t gold. 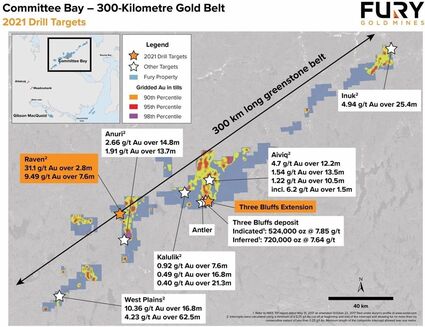 Fury plans to drill the Raven prospect through aggressive step outs to demonstrate the scale of the system and to explore the entire length of the 8,000-meter-long shear zone to define new targets through systematic till sampling and geological mapping.

"Our technical team views the high-grade veins at the Raven prospect as the highest probability for a major discovery on the belt this year as the historical drilling positions us for the ability to rapidly expand the body through aggressive step outs," said Fury Gold Mines Senior Vice President of Exploration Michael Henrichsen. "In addition, we will continue to advance our high-priority geophysical targets through the critical step of mapping to define geometry as we advance these targets to drill stage."