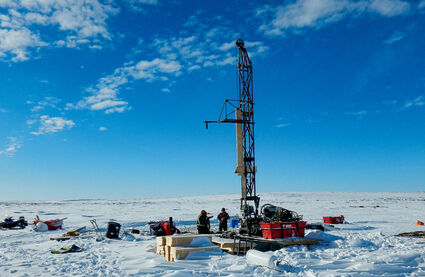 North Arrow drills the EG-05 kimberlite during the 2018 winter exploration at its Loki diamond project in the Lac de Gras region of the Northwest Territories.

Roughly 35 kilometers (22 miles) southwest of the Ekati Mine and 40 kilometers (25 miles) west of the Diavik Mine, Loki is found in a region known for its rich diamond deposits.

Five diamond-bearing kimberlites have been discovered across the Loki project area.

Partially supported by a Northwest Territories Mining Incentive Program, this winter program will include gravity surveys to better define the size and geophysical signature of the EG05 kimberlite, which has not been constrained by drilling completed so far, and gravity and magnetic surveys to help identify drill targets in the north Loki target area. 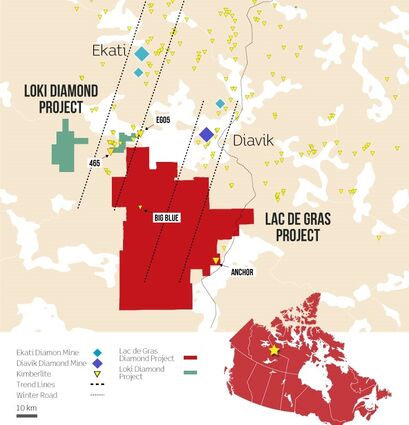 North Arrow can make early repayment of the loan from Anglo Celtic at any time without prepayment penalty or bonus, with any outstanding balance on the loan to be repaid in full by Feb. 16, 2022. The loan will carry an interest rate of 10% per annum, with accrued interest to be paid at the time of repayment.

As further consideration for agreeing to advance the loan, North Arrow is issuing 1 million shares to Anglo Celtic. Prior to the delivery of these shares, Anglo Celtic and D. Grenville Thomas hold 12.56 million North Arrow shares, representing roughly 11.35% of the diamond explorers issued and outstanding share capital.

North Arrow will use the loan to advance the company's exploration projects in Canada and for general working capital.