Buyout will give major another large BC copper-gold project North of 60 Mining News – March 10, 2021 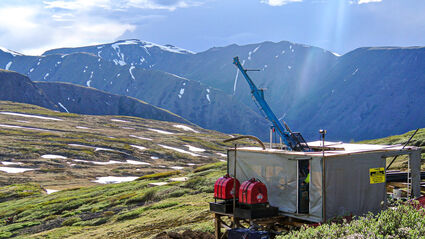 A drill tests Saddle North, a porphyry deposit on the Tatogga property with roughly 4.8 billion lb of copper, 8.9 million oz of gold, and 19 million oz of silver in all resource categories.

Newmont Corp. has laid down a US$311 million (C$393 million) cash offer to acquire full ownership of GT Gold Corp. and its Tatogga copper-gold-silver project in the traditional territory of the Tahltan Nation of northwest British Columbia.

"We are excited to expand our world-class portfolio to include the Tatogga project in the Tahltan Territory located in the highly sought-after Golden Triangle district of British Columbia, Canada," said Newmont President and CEO Tom Palmer.

Newmont first grabbed a solid foothold in the Golden Triangle with the 2018 acquisition of Novagold Resources Inc.'s 50% interest in Galore Creek, a large copper-gold-silver project it now owns in partnership with Teck Resources Ltd.

This interest in Tatogga came on the heels of GT Gold's discovery of Saddle North, a porphyry copper-gold deposit similar to those at Newcrest Mining Ltd. and Imperial Metals Corp.'s Red Chris mine about 20 kilometers (12.5 miles) to the southeast.

GT Gold originally planned to use this resource as the basis for a preliminary economic assessment that provides a first look at the engineering and economic parameters of establishing a mine at Saddle North. With the buyout offer by Newmont pending, however, GT Gold will not be releasing this report that was due out about now.

While it is also unlikely that Newmont will publish the PEA in its entirety, the global gold mining company did say the "Tatogga project, including the primary Saddle North deposit, has the potential to contribute significant gold and copper annual production at attractive all-in sustaining costs over a long mine life. In addition to the known deposits at Saddle North, there are further exploration opportunities throughout the land package."

And the soon-to-be-owner of this attractive gold-copper project has already begun building a relationship with the Tahltan Nation, a key to ensuring local support for any future development there.

"Newmont recognizes that our relationships with indigenous, First Nations and host communities are critical to the way we operate. We are committed to continue building a constructive and respectful relationship with the Tahltan Nation, including with the community of Iskut, which is near the project, in anticipation of exploring this highly prospective area," Palmer added. "We understand and acknowledge that Tahltan consent is necessary for advancing the Tatogga project and we will partner with the Tahltan Nation at all levels, and with the government of British Columbia to ensure a shared path forward." 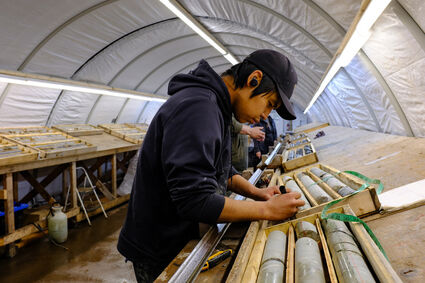 Logging core from the 2020 drilling at Tatogga, a program that tested discovery targets across the wider property.

Newmont acquired additional shares of GT Gold since its initial investment in the explorer, and by early this year the major owned a roughly 14.9% stake in the junior. Newmont agreed to acquire all the outstanding GT Gold shares it does not already own for C$3.25 per share, which is a 38% premium to the 20-day average price. Including the shares already owned by Newmont, the total value of this deal is roughly US$361 million (C$456 million).

"We are very pleased to be announcing this transaction with Newmont today, representing the execution of our plan and the culmination of significant value creation for GT Gold shareholders since the formation of the company," said GT Gold Executive Chairman Ashwath Mehra. "The transaction is not only a great outcome for our shareholders, but also one that we believe will benefit all our rightsholders and stakeholders in the coming years."