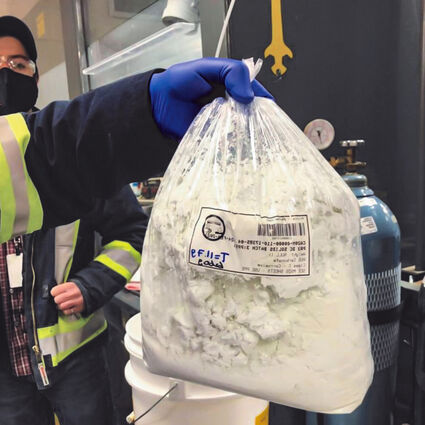 A bag of rare earth carbonate produced from Vital Metals' Nechalacho Lake project in Northwest Territories ready to be shipped to REEtec in Norway for separation into REE oxides.

Vital is hoping to begin production of rare earth oxide at Nechalacho in the second quarter of 2021, with early production from a North T starter pit. The miner has completed detailed engineering for an ore sorting plant, and defined capital and operating costs. Vital aims to produce a minimum of 5,000 metric tons of contained REO by 2025 at the project, and has signed an off-take agreement with REEtec, a Norwegian company, for Stage 1 production with the supply of 1,000 metric tons of REO, excluding cerium, per year for an initial five-year period.

Vital reported the fete March 8 and said it will prepare additional samples of REE carbonate that it will make available to other prospective customers.

"Production of our bulk sample for REEtec is another important step towards reaching full production at Nechalacho," said Vital Metals Managing Director Geoff Atkins in a statement. "Production of this sample demonstrates we have our processes working correctly, and we are preparing to send the sample to REEtec so it can undergo customer acceptance, as well as producing samples for other potential customers."

Atkins also said the company is preparing for an ore sorter to arrive at Nechalacho.

Mining is on track to begin at the Nechalacho property this spring after Vital signed a definitive mining contract with Det'on Cho Nahanni Construction Ltd., a local First Nations-owned company, for work to commence at the North T Zone. Work under the mining contract will include mining, site clearing, preparation of retention pond, construction of site roads and the ROM pad, plus crushing and screening. Det'on Cho Nahanni Construction will mobilize to the site at Nechalacho via ice road by the end of March. In addition, Vital has launched a drill program at Nechalacho to define a mine plan for Stage 2 of production from the Tardiff deposit. Vital is testing three high-grade targets in Tardiff and will evaluate potential expansion of the T Zone by targeting two additional zones, the South T and the S zones, which lie adjacent to the planned North T pit, where the company aims to commence production.

Vital also reported that the world-renown rare earths expert George Bauk that it hired for two months as a strategic advisor at the beginning of March resigned due to unforeseen circumstances with less than a week on the job.

Atkins said a key philosophy in Vital is to draw on the practical experiences of those who have worked in the development and operation of rare earth projects to help ensure the successful commencement of operations and ongoing success of the company.

"There aren't that many people who can lay claim to have explored, developed and produced in the rare earths space, and George is one of them," Atkins said in announcing the appointment March 2. "(Bauk) is part of a small group of people who have been there and done it, and we will no doubt benefit from his experience in what is shaping up as the most critical phase of the company's development of Nechalacho," he added.

He has worked in the rare earths sector for 15 years, and his previous role at Northern Minerals enabled him to travel to many rare earths operations across multiple countries, including China, Malaysia, Vietnam, USA, France and the UK, adding that the learning experience was extreme.

"I also had a window into other rare earths jurisdictions including Germany, Japan, Canada, and South Korea, courtesy of contacts I developed over time in those countries," he said. "The global rare earths community is relatively small and tightknit, and the things I learn(ed) from touring those operations and meeting and dealing with a multitude of other rare earths players was invaluable."

As Managing Director of Northern Minerals, Bauk was the driving force behind the development of the Browns Range heavy rare earths deposit in northwest Australia. Bauk oversaw the exploration program, the financing and building of the A$60 million pilot plant at Browns Range and ultimately the trial production of rare earths at the project. He navigated the financial and EPC markets and engaged with government to overcome significant hurdles in the Australian government's research and development tax refund scheme and the Foreign Investment Review Board. Over the past four years, Bauk has spent considerable time in both Washington, D. C. and Canberra, AUS, discussing the challenges in the global supply chain and what needs to be done to see new global capability in rare earths. He has raised more than A$250 million in debt and equity globally for Browns Range and negotiated many memoranda-of-understanding offtake agreements and two offtake contracts, one with ThyssenKrupp, which included delivering a new supply of rare earths into the offtake agreement.

Bauk also has overseen exploration projects in both of the key jurisdictions in which Vital Metals operates – Canada and Tanzania, the latter of which was a three-year engagement that required 15 in-country visits. 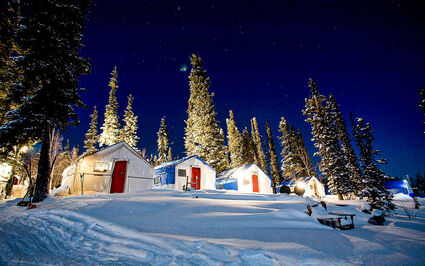 This camp at Thor Lake, Northwest Territories served as a base for Avalon Advanced Materials' exploration of the Nechalacho rare earths project now being developed by Vital Metals.

Vital said Bauk's experience in leading a company during the construction and commencement of rare earths production and the rare earth market is invaluable, especially for Vital, which is on track for initial rare earth production in CY2021.

"It is with great disappointment that ... I am no longer able to fulfill the role of strategic advisor to Vital, Bauk said March 8. "During my short time working with the Vital team, I have been extremely impressed by the quality of the Nechalacho project, the management and board of Vital.

"More importantly, I believe that Vital's go-to-market strategy is the most appropriate way to develop a rare earth mine. My time with the team has left me in no doubt that Vital (is) well on track to successfully bring the Nechalacho project into production in 2021 to become Canada's first rare earth operation."

Vital had previously agreed to issue 50 million options to Bauk under the terms of the appointment; however, as a result of his resignation, no options will be issued.