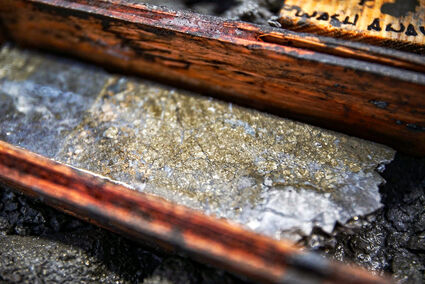 High-grade mineralization in the core from a hole drilled at Skeena Resources' Eskay Creek gold-silver project in the Tahltan First Nation Territory of Northern British Columbia.

"In partnering with Skeena, the Tahltan Nation is evolving and taking significant steps forward by becoming meaningful equity partners in these projects," said Tahltan Central Government President Chad Day. "Ownership provides the Tahltan Nation with a strong seat at the table as we continue our pursuit towards capacity building and economic independence for the Tahltan people."

The Tahltan people were mining BC's prolific Golden Triangle long before European prospectors came to the area in the search for gold at the end of the 19th century.

"Mining has always been part of our culture, both in the past and in present-day times. For thousands of years, our people prospected, mined, and utilized obsidian for tools, weaponry, and trade," said Day. "More recently, Tahltans supported miners during the gold rush and have had operating mines in our homelands for multiple generations."

While the Tahltan Nation welcomes responsible mining in its territory as long as this work is carried out in accordance with Tahltan laws and policies. The Golden Triangle First People, however, will oppose mining companies that do not abide by these policies.

Recently, the Tahltan Central Government notified Doubleview Gold Corp., a minerals exploration company that had been exploring the Hat porphyry copper-gold-silver project in the Golden Triangle, that it was no longer welcome to work in Tahltan Territory.

"Tahltans take pride in working meaningfully with industry partners and the province, but this company has continually been disrespectful and resistant to following the protocols and processes we have in place with mineral exploration companies throughout Tahltan Territory," said Day.

Many companies working in the Golden Triangle have built strong relationships with the Tahltan Nation, including Skeena.

"Over the years we have often discussed our mutual desire to have the Tahltan Nation become owners of natural resource projects being developed in their territory," said Skeena Resources President and CEO Walter Coles.

Under the investment agreement, the Tahltan Central Government will invest C$5 million to acquire 1.6 million investment rights at C$3.13 per right. These rights will automatically vest and convert into Skeena shares over a three-year period following the closing of the offering.

"This investment into Skeena represents a further step in an evolving relationship with the Tahltan Nation," said Coles. "We look forward to continuing our work with the Tahltan and gaining the support required for Skeena's projects."

Skeena's Eskay Creek project is home to an underground mine that produced roughly 3.3 million ounces of gold and 160 million oz of silver over a 14-year span ending in 2008. Today, the project hosts 12.71 million metric tons of surface mineable indicated resource averaging 4.5 g/t (1.82 million oz) gold and 117 g/t (47.79 million oz) silver; plus 13.57 metric tons of surface mineable inferred resource averaging 2.2 g/t (984,000 oz) gold and 42 g/t (18.46 million oz) silver. A prefeasibility study on developing an open-pit mine at Eskay Creek is slated for completion by mid-2021 and a feasibility study is expected by the end of the year.

Both projects are found in the southern portion of Tahltan Territory.