UAF's HyLab is ready for the minerals hunt

University has only hyperspectral imaging facility in Alaska North of 60 Mining News – May 28, 2021 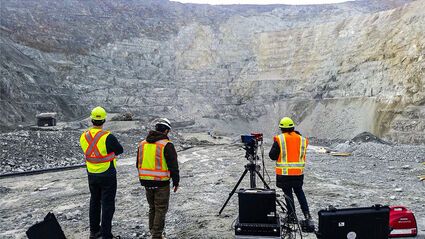 Field scans being made of exposures at Kinross Gold's Fort Knox Mine northeast of Fairbanks, Alaska. These scans serve as ground validation for airborne hyperspectral data.

Alaska contains minerals essential to the national defense, renewable energy and electronics industries. Finding those minerals, however, can be difficult in such a vast and geologically challenging state.

The University of Alaska Fairbanks Geophysical Institute has the only hyperspectral imaging facility in the state at its Hyperspectral Imaging Laboratory created in 2014 as the brainchild of Anupma Prakash, who at the time, was a geophysics professor and director for the Division of Research at the College of Natural Science and Mathematics and is now UAF provost and executive vice chancellor. The National Science Foundation funded the project.

HyLab's airborne cameras and ground spectrometers can provide an exceptionally detailed map of an area's geologic makeup by measuring surface reflectivity in a variety of wavelengths, including many not visible to the human eye. Mining exploration experts can then look at the mineral composition of a surface and deduce what might lie beneath.

"It's a goal for the university to support industrial applications and to help industry and help Alaska's economy," HyLab Director Martin Stuefer said. "It's our goal to help more and to get more involved in industrial work as the industry needs and wants us to."

Mining is a key part of Alaska's economy, as noted in the annual state proclamation declaring May 10 as Alaska Mining Day. HyLab can help the mining industry and, therefore, the economy.

HyLab can benefit not only the local, Alaska, and national economies but also national defense by helping delineate Alaska's deposits of critical minerals.

Alaska fits in with the solution to that problem, and the Geophysical Institute's HyLab has the tools to help.

The U.S. Geological Survey points out that Alaska's "geographic separation and complex tectonic history" have combined to provide it with mineral resources not common elsewhere in the nation. It states that Alaska has "high potential" for containing strategic and critical elements such as thorium, niobium, tantalum, indium, gallium, germanium, rare-earth elements, platinum-group metals, tin, manganese, titanium and vanadium.

But the USGS also notes that "discovery is hindered by Alaska's vast size, remoteness, and rugged terrain."

Hyperspectral surveying, the agency states, can help. It "is one method that can be used to rapidly acquire data about the distributions of surficial materials, including different types of bedrock and ground cover." 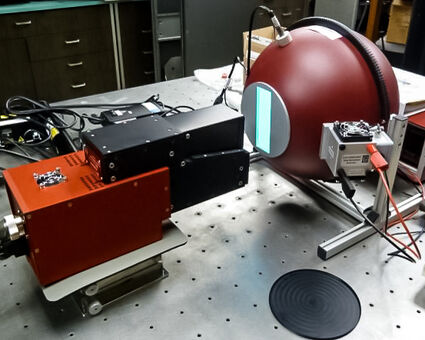 Universities across the nation often provide essential early support to industry because of their research capabilities and government funding. The University of Alaska Fairbanks Geophysical Institute can act in the same manner through HyLab in supporting mineral exploration in Alaska.

"Hyperspectral imaging - imaging with hundreds of colors instead of the usual red, blue, green - has enormous potential to identify regions rich in minerals critical to the U.S.," Geophysical Institute Director Robert McCoy said. "Scientists in the Geophysical Institute's HyLab are ready to work with industry to help find these valuable resources."

EDITOR’S NOTE: UAF’s HyLab is ready for the minerals hunt was originally published in the May 14, 2021 online edition of North of 60 Mining News.