For 69 years, Canada-born Alaskan has flown the world in search of mineral deposits, adventure and occasional lost soul North of 60 Mining News – June 25, 2021 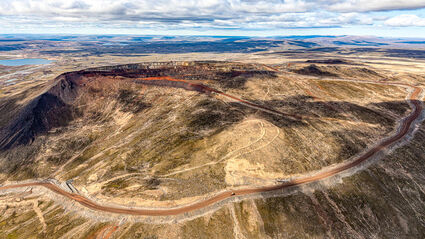 Today, the mountain of high-grade iron that caused the compass in Ron Sheardown's Cessna to spin eratically during a mineral exploration flight over Nunavut is the site of Baffinland's Mary River Mine, which produces the highest grade direct shipping iron ore in the world.

Few men and women could attest to having lived with an adventurous spirit and actually having gone and adventured, but this isn't so for mining and aviation pioneer Ronald Sheardown. Soon to be inducted into the Alaska Aviation Museum's Hall of Fame for Pathway and Explorer Pilot this year, Ron has lived a life many could not even dream about.

Born in Bolton, Ontario, in 1936 – a stone's throw from Toronto – Ron came from a time when aviation was still in its fledgling years, and Man was still mastering the ways to conquer gravity.

As a young boy, Ron grew up watching planes and seeing them come and go at the Toronto International Airport. This would ignite the adventurous spirit inside a young Sheardown, resulting in a future filled with life-saving rescues, polar exploration, geological discoveries, the achievement of many "firsts" in aviation, an award from the Canadian Consul General, as well as one from the President of the United States.

In 1953, at just sixteen years old, Sheardown walked away from that airport with a license to fly, and today has amassed over 19,000 hours of flight time with more than 10,000 of those hours in regions that are considered the Far North.

His lifetime of flying and experience has landed him in all fifty of the United States, every Canadian province and territory, and all over Europe, including Iceland, Poland, Hungary, former Czechoslovakia, Spain, Norway, Portugal, Sweden, Denmark, Germany, France, and the United Kingdom.

This globetrotting list continues with flights to Japan, Korea, Micronesia, and Greenland and more than 100 trips through Russia, none of which mention the obscure locations such as Spitsbergen, Midway Atoll, Marshall Islands, and Saipan.

Ron Sheardown may have been born on earth, but the wonder of the sky captured his imagination and adventurous spirit from the get-go, taking him to the far reaches of the globe, and the discovery of a lifetime.

In 1954, a year after obtaining his pilot's license, Sheardown landed a flying job for L&L Dredging, a mining company out of Barkerville, British Columbia.

Two years later, he would start working for World Wide Airways flying transport planes for Distant Early Warning Line construction in the high Canadian Arctic and Greenland. Still, it wouldn't be until 1958, at 21 years old, that he would start piloting for Murray Mining Corp., becoming an exploration manager and eventually becoming a board member. It was here he would meet and work for his long-time partner and mineral exploration colleague, Murray Watts.

Like many famous duos, Sheardown often accompanied future Canadian Hall of Fame inductee Watts. Fellow countryman and adventurous spirit, Watts had his own life painted with discovery and exploration. Paired with Sheardown's own wanderlust, the duo sought potential mining claims in the far northern reaches for many years.

In an article called "Above the Skies," Sheardown described a nine-day geological reconnaissance trip he and Watts flew over Baffin Island in what is now the Canada territory of Nunavut. The two men "cruised over the forbidden terrain of north-central Baffin Island, their mission: to find commercially valuable minerals that their geological knowledge and experience assured them were there."

On July 24, 1962, after logging 30 hours of flight time on the project, the compass in Sheardown's Cessna 180 began to spin erratically due to the magnetic pull of what he and Watts soon discovered to be an entire mountain of iron.

Sheardown landed his Cessna on "Sheardown Lake," and the two men climbed to the top of the 2,500-foot hill of very high-grade iron ore – the discovery of a lifetime.

"I remember two things that Murray said at the time when we were sampling and staking; one, 'look around, do you see anyone?' I said no, and he said watch how many people that will tell you they told you about this discovery. There were many. Two, it will take ten to fifty years to develop. It is getting damned close to fifty years," wrote Sheardown in his discovery notes, detailing the often uncomfortable and wet experiences that are so frequently neglected to be mentioned when stories of pioneering and exploration are told.

According to Sheardown's notes, the weather was foul, so the two men were forced to seek refuge in a nearby camp, only to return to Sheardown Lake in August. Upon return, the duo hauled over eighty pounds of samples each from the site of the future Mary River Mine, claiming title to the world's second-richest known deposit of iron.

"Above the Skies," recounts the two prospectors staking approximately 60 claims to "protect their interest in that part of the world in which no geological knowledge existed prior to this visit. The Sheardown-Watts discovery was unique, unprecedented, and history-making."

Today, theMary River site on Baffin Island is home to one of the most northern mines in the world, having among the richest iron ore deposits ever discovered that consists of nine-plus high-grade iron ore deposits.

It was the passing of Canadian Hall of Famer, awardee of the Order of Canada, and the Massey Medal of the Canadian Geographical Society – Murray Watts, that Toronto-based Baffinland Iron Mines Corp. obtained the rights to the mine in 1982.

Over the course of 17 years, six of Sheardown and Watt's claims have gone into production and are being actively mined.

Today, 57 years after getting his first taste of mining in BC, Ron remains active in mineral exploration and continues to make discoveries. He is currently CEO of Greatland Exploration Ltd., with interests in Alaska, Canada, Chile, Mexico, Russia, and the U.S.

Through all Sheardown's years of flying in the North and around the globe, he had the privilege and altruism to come to the aid of many individuals, personally being involved in the rescue of nearly a dozen separate incidents. Most notably was perhaps the rescue of Robert Gauchie, who credited Sheardown's timely arrival as his second chance on life.

With night temperatures reaching 40 degrees below zero just north of the Arctic Circle, bush pilot Gauchie preheated his plane and departed Cambridge Bay, Northwest Territories on Feb. 2, 1967. His plan was to make it to Yellowknife by mid-afternoon and continue home the following day to Fort Smith.

Shortly after noon, Gauchie encountered a driving snowstorm, about to set an instrument course, he found that neither his turn and bank indicator nor artificial horizon was working.

Without the instruments to guide him through the winter storm he radioed "Mayday," and the Royal Canadian Air Force suggested he land, seek refuge, and activate SARAH (search and rescue transmitter). Little did he know, he was about to become stranded in the vast and bone chilling cold of the arctic in winter, nearly losing his life.

The transmitter did not work.

Days passed as he endured blistering winds and freezing temperatures, with the mercury often dipping under 40 below zero. Occasionally, an aircraft would pass overhead, and while Gauchie fired flares, they were all too late to be seen.

For 58 days, the intrepid bush pilot kept a log during his time stranded, as each plane that passed him assured his eventual end. He finally wrote what could only be his last words, penning to his wife that he didn't have but a couple days of life left.

Then on April 1 at 6 pm, as Gauchie was crawling into his sleeping bag, he heard the familiar sound of a plane.

Immediately jumping out of his shelter, he fired a flare as the turbine Beaver flew overhead, but it continued on as many had before. Facing certain death otherwise, Gauchie realized that the red Beaver began to increase in size. "It was turning back!"

Sheardown and co-pilot and mechanic Glen Stevens were flying to a mining camp after being delayed due to a mechanical issue with their plane. It was approaching sunset when they passed Samandre Lake, and Stevens happened to catch a reflection of the sinking sun off something that seemed unusual.

Quickly turning around, they descended 2,000 feet, where both pilots saw a dark figure moving out from an aircraft barely visible in the snow.

"He stood there with a blue suitcase, like a man waiting for a bus," recalled Sheardown.

Gauchie limped toward the turboprop. He was "a haggard creature with shaggy hair, both feet wrapped in dirty canvas, and a bearded, emaciated face lighted by a shining grin."

"Hello," said Gauchie. "Do you have room for a passenger?"

Two and a half months in a hospital with another six months of recuperating at home, Gauchie never forgot his second chance and would call Ron every April 1 to say thank you.

In a book published to honor Canada's 100th birthday, Gauchie penned a note to Ron thanking him once again for saving his life:

"This book was published in honor of Canada's 100th birthday. I was fortunate enough to be included in it. I took it for granted you had a copy until we spoke on the 25th anniversary of you finding me. Ironic, isn't it? That the guy who saved my life doesn't get a copy of the book for a quarter of a century after the fact. Thanks again for all the extra years you gave me." -Gratefully, Bob Gauchie.

Although it is possibly his most notable rescue, throughout the course of his piloting career, over the vast wildernesses of the North, Ron would undertake nearly a dozen separate rescue missions, saving the lives of many people.

A life of accolades

"I am a firm believer that if a pilot has not had a catastrophic failure, they will never know how to fly the aircraft or helicopter when it happens, and it will." -Ron Sheardown

A lifetime of accomplishments includes being honored by the Canadian and U.S. governments for his aviation and mining activities.

In 2002, the Canadian Consul General presented Ron with the Order of the Smashed Brick Award. The award recognizes "...outstanding efforts of those Americans and Canadians who devote so much of their time and energies to cement the already close relationship between Canada and the United States" and "honors those who seek to dismantle walls of misunderstanding and mistrust."

He was also a part of the UAA ADS-B Capstone Team that won the Robert J. Collier Trophy in 2007, awarded for outstanding achievements in the advancement of aviation.

Ron was an essential part of the University of Alaska – Anchorage team that worked on the "Capstone" programs that involved developing the Automatic Dependent Surveillance Broadcast (ADS-B).

A member of the famed Explorer's Club, a life member of the Prospectors and Developers Association of Canada, a recipient of the Canadian Aircraft Owners and Pilots Association – 60-year member certificate, and has served as Honorary Consul to Canada for 15 years and is Consul Emeritus, Sheardown still owns an R-44 and a Westwind 1124 and keeps his licenses current.

More recently, Ron has received notice of his induction into the Alaska Aviation Museum's Hall of Fame, under the category of Pathway-Explorer Pilot. Unfortunately, due to the pandemic in 2020, the ceremony was postponed until 2021 where Sheardown's name will remain with the other great pathfinders and pioneers in Alaskan aviation history.

Besides aviation and world travel, his other interests include exploring, skiing, photography, camping, hunting, and fishing. Yet rightfully so, he remains fascinated with discovery and aviation, and thankfully, is always willing to use his aviation skills and helpful spirit to support those in need of assistance. 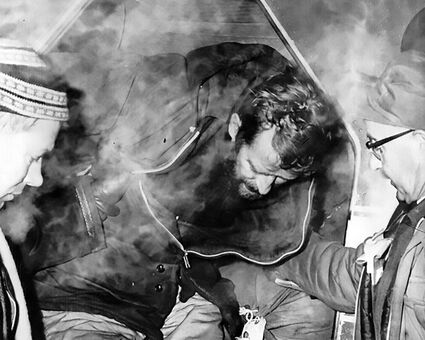 Ron Sheardown (left), Bob Guachie, and Glen Stevens (right) as Guachie exits a rescue craft on April 1, 1967, after going missing when his plane went down in the Canadian Arctic. Gauchie was stranded for 58 days in sub-zero weather.