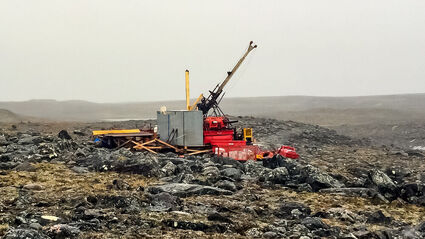 Fury plans to complete around 3,000 meters of drilling to test the Raven gold prospect at Committee Bay.

Fury Gold Mines Ltd. July 14 announced the start of a roughly 5,000-meter drill program that will follow up on high-grade gold at the Raven prospect and test the resource expansion potential below the Three Bluffs deposit at its Committee Bay project in Nunavut.

"Committee Bay represents a potential major gold exploration opportunity in Nunavut where some of the largest global gold discoveries have been made," said Fury Gold Mines President and CEO Mike Timmins. "This year's high impact exploration plan has been designed to test significant extensions of high-grade mineralization at both Raven and Three Bluffs, as well as advance several high priority targets on the belt to drill stage."

Three Bluffs, the most advanced target at Committee Bay, lies at the center of this expansive and highly prospective greenstone belt.

To demonstrate the potential for resource growth at the deposit, the company plans to test the entire conductive body with drilling this year.

The balance of the 2021 drilling will be carried out at Raven, a prospect about 40 kilometers (25 miles) west of Three Bluffs that lies along an 8,000-meter-long shear zone where gold mineralization occurs in quartz-arsenopyrite veins.

So far, systematic exploration has been carried out over 1,200 meters of this shear zone, including the collection of 207 rock samples with values greater than 5 g/t gold, and even one with 143 g/t gold.

Highlights from nine historic holes drilled over a 400-meter area at Raven include: 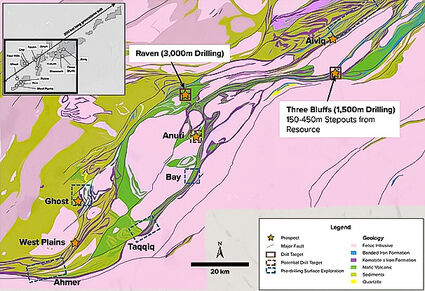 In addition to drilling at Three Bluffs and Raven, the 2021 Committee Bay exploration program will include geologic mapping and sampling of several prospect areas in the southern half of the expansive gold property in Nunavut.

Fury plans to drill the Raven prospect through aggressive step-outs up to 500 meters down plunge from previous drilling to demonstrate the scale of the system.

The company also plans to carry out systematic till sampling and geological mapping to define new targets along the entire length of the shear zone at Raven.

"We are excited to drill for scale at the Raven prospect to demonstrate the true size potential of this early staged discovery within 50 kilometers of the Three Bluffs deposit," said Fury Gold Mines Senior Vice President of Exploration Michael Henrichsen. "The technical team is also looking forward to advancing a number of regional targets to drill stage this summer in preparation for the 2022 exploration season."