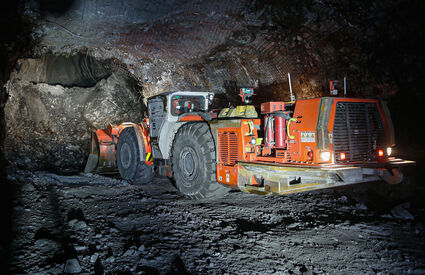 Hecla's Greens Creek Mine in Southeast Alaska produced 5.14 million ounces of silver at negative $1.65 per oz after byproduct credits during the first six months of 2021.

Hecla Mining Company Aug. 5 reported that the gold, zinc, and lead produced at Greens Creek generated more than enough cash to pay the costs to produce the 5.14 million ounces of silver during the first six months of 2021.

After calculating in byproduct credits, the cash cost to produce an ounce of silver at Greens Creek during the first half of the year was negative $1.65. This means that every ounce of silver produced at the underground mine earned Hecla $28.10, which includes the average price the company received for the silver it sold plus the extra credits for the other metals.

The all-in sustaining costs per ounce of silver produced at Greens Creek, a more comprehensive measure that includes sustaining costs such as exploration and underground development, was $1.14 after byproduct credits.

Hecla's realized price for gold during the first half of this year is up 8%, zinc jumped by more than 50%, and lead increased by nearly 39%, compared to the first six months of 2020.

With Hecla's realized silver price also increasing by 59% compared to the first half of last year, the Greens Creek mine helped to drive strong revenues for the Idaho-based miner.

In fact, the second quarter is the company's second best in terms of revenues, gross profit, and cash generated by its five North American operations.

"Despite the continuing pandemic, Hecla had near-record results across a number of metrics improving on the consistent performance of the past two years," said Hecla Mining President and CEO Phillips Baker, Jr. "We generated over $54 million of free cash flow due to a combination of lower treatment charges, increasing throughput and recoveries, and higher prices. Our American silver mines produce more than 40% of all the silver mined in the United States and with silver being important for the transformation to renewable energy, electric vehicles and 5G, Hecla's growing silver production and low costs make it well-positioned for even better results in the future."

Accounting for more than 70% of the silver coming out of Hecla's mines, Greens Creek is a significant contributor of this American silver and is expected to be a major beneficiary of the growing need for silver in green energy, transportation, and modern communications.

Hecla continues to forecast that Greens Creek will produce 9.5 million to 10.2 million oz of silver this year and has increased its gold production guidance for the Southeast Alaska mine to 43,000 to 45,000 oz, from its previous 2021 guidance of 40,000 to 43,000 oz. The estimate for 2021 cost of sales has been updated to $222 million. Due to lower expected capital costs and higher byproduct credits, Hecla has adjusted the estimated cash cost to produce an ounce of silver at Greens Creek this year to around zero and all-in sustain costs to roughly $3.65.