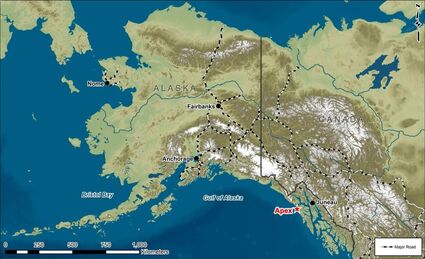 Apex is on the north side of Chichagof Island, about 70 miles southwest of Juneau and 75 miles southwest of Coeur's Kensington gold mine. This property is home to the historical Apex and El Nido mines, which produced at least 34,000 ounces of gold from ore averaging around one oz of gold per ton during sporadic operations between 1922 and 1940.

According to United States Geological Survey reports, the ore was extracted from nearly 1,200 meters of underground workings on four levels.

Surface exploration was done by WGM Inc. in the 1980s, but no drilling was carried out, and the property has been dormant since.

The company says a swarm of quartz veins can be observed on the surface over a width of more than 200 meters above the Apex Mine portal. Within the swarm, four thicker veins were the subject of the historic mining efforts. Geological and geochemical features suggest the vein system has continuity for 2,000 meters to the northeast. The gold-bearing vein system has never been drill tested along strike or below the historic workings

"From historic documents, we know that high-grade gold ore was previously mined, but there has never been a single exploratory hole drilled," said Millrock Resources President and CEO Greg Beischer. "It seems likely that the known high-grade gold-bearing quartz veins will continue along strike and in the down-dip direction."

Coeur may determine not to proceed to exercise the option at any time, but if it makes all the payments and expenditures, it will vest with a 100% interest in the underlying claims.

Upon exercising the option to purchase the Apex El Nido Gold Mine claims, Millrock will transfer the surrounding claims not subject to the option to Coeur, and the entire project will become subject to a 2.5% net smelter returns royalty in favor of Millrock. Coeur will have the right to reduce the royalty to 1% by paying Millrock US$3 million. 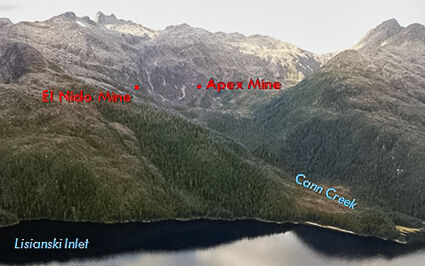 The past-producing Apex and El Nido mine portals are at tree level, roughly 360 meters above sea level.

Coeur will pay Millrock an advanced royalty payment of US$50,000 and an annual payment that will increase by US$50,000 each year until production occurs. The property will revert to Millrock in the event that Coeur elects to discontinue advanced minimum royalty payments.

Millrock will carry out the exploration on the Apex property under a services agreement with Coeur.

Soil sampling being carried out this year is focused on tracing the mineralized structure and refining vein locations in anticipation of a 2022 drilling program at the high-grade gold project.

"We are pleased to enter into this agreement with Coeur Explorations and will work diligently with their exploration team to explore the claims," said Beischer. "We'll start with surface geochemical sampling and detailed structural mapping this year and look to drill in 2022."