An ore car sits outside a portal at the historic Lucky Shot gold mine project in Southcentral Alaska.

Contango ORE Inc. Aug. 25 announced that it has acquired full ownership of the historic Lucky Shot gold mine project in the Willow Mining District of Southcentral Alaska.

A road-accessible project about 75 miles north of Anchorage, the 8,590-acre Lucky Shot property blankets a large portion of the Willow Creek Mining District, including the pre-World War II Lucky Shot and War Baby mines. It is estimated that from 1918 until being shut down by the federal War Production Board in 1942, these two underground operations produced some 252,000 ounces of gold from 169,000 tons of ore, indicating an average head grade of around 1.6 oz (50 grams) of gold per metric ton.

All told, the various mines on the Willow Creek property produced roughly 500,000 ounces of gold from ore with an average grade north of 1 oz/t (31 g/t) prior to being closed during World War II.

With Kinross Gold Corp. taking the lead on the feasibility-level studies at Manh Choh, a gold mine project near the village of Tetlin in eastern Alaska that is being advanced under a joint venture between Kinross (70%) and CORE (30%), Lucky Shot offers CORE another accessible gold mine project.

"Although it is full steam ahead for the Manh Choh project based on the latest Kinross guidance, the Lucky Shot project represents an exciting opportunity to add significant additional value for Contango shareholders and marks a new focus for the Company," said Contango ORE President and CEO Rick Van Nieuwenhuyse.

After the Willow district mines were shut down due to the war effort, little happened on the property until the 1980s when Enserch Exploration conducted an extensive exploration program, which included the development of a 457-meter exploration adit below the Lucky Shot Mine. In 1984, Enserch completed 11 underground core holes and seven surface core holes in the Coleman zone at Lucky Shot.

From 2005-2009 Full Metals Minerals completed an additional 34,103 meters of drilling in 173 core holes from surface along a more than one-mile trend of high-grade gold mineralization that encompasses four zones – Coleman, Lucky Shot, War Baby, and Murphy. Each of these zones is a section of a continuous vein that has been segmented by high-angle faults. Coleman, Lucky Shot and War Baby were historically mined; Murphy is a potential eastern extension of the vein system that was later discovered.

Looking to reestablish a mine at Lucky Shot, Miranda Gold Corp. acquired the project in 2013 and brought in Alaska Gold Torrent Inc., a private company led by a mine engineer, to move the project forward.

Based on the initial resource, Gold Torrent commissioned a preliminary feasibility study that outlined a 200-metric-ton-per-day operation that would produce around 25,000 oz of gold per year once the mine is up to full production.

Gold Torrent planned to use a gravity system to recover the gold, a method that has historically liberated more than 85% of the gold and is expected to be boosted to 90% with modern recovery equipment and techniques.

The company, however, was not able to repay a loan forwarded by Cartesian Royalty Holdings and Gold Torrent (70%), and Miranda's (30%) interests in Lucky Shot were signed over to the Singapore-based financier in 2018.

CORE has agreed to pay up to $30 million in cash and shares to acquire these interests in the Lucky Shot project, which includes 725 acres of patented mining claims over the historically mined area; 7,825 acres of state claims surrounding the patented land; and a processing site located about 30 road miles to the west.

CORE has also committed to invest $10 million on exploration at Lucky Shot within three years of the closing date of the transaction, including $5 million in the first 18 months.

Further, after CORE has made additional exploration, mining, and development expenditures on the Lucky Shot prospect of at least $5 million above the $10 million of required exploration spending, the additional spending will go toward any outstanding payments due for Lucky Shot.

CORE plans to reestablish underground access to drill the down-dip extension of the Lucky Shot and Coleman mines.

Once access is established, the company plans to refurbish the underground workings, where the granodiorite host rock generally needs little support and develop 600 meters drift paralleling the vein, followed by roughly 2,400 meters of underground diamond drilling to define a new resource. 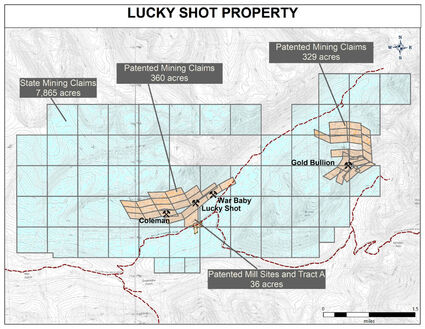 The Lucky Shot and Coleman veins have only been mined for about 200 meters down dip. CORE says these types of mesothermal vein systems typically extend for kilometers down dip and the company sees the potential to develop significant high-grade gold resources by drilling down dip of the vein system that extends more than 1,600 meters east from Coleman, through Lucky Shot and to War Baby.

"Contango is well positioned, with experienced personnel and capital, to explore and expand the historic high-grade resource at Lucky Shot," said Van Nieuwenhuyse. "We feel the exploration potential of the Willow district is excellent, albeit perhaps under-appreciated."