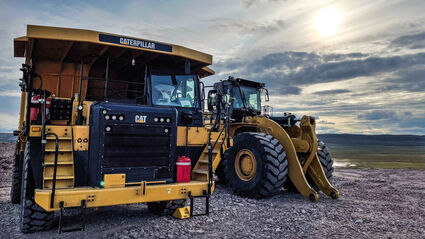 A Cat haul truck and loader delivered to Sabina's Back River gold project in Nunavut on Aug. 23.

Sabina Gold & Silver Corp. Aug. 24 announced that it is making significant progress on large predevelopment projects and the delivery of equipment and supplies that further the proposed Goose Mine on the company's Back River gold project in Nunavut, Canada.

"Tremendous work has been completed during the first nine months of 2021 as we propel the project towards a production decision," said Sabina Gold & Silver President and CEO Bruce McLeod. "We have been advancing the underground exploration ramp at Umwelt, have completed critical civil works at the Goose site, and have prepared the Sabina Port facility to receive the largest sealift planned to date, which is now offloading the first ship. We have also completed detailed engineering and received ... construction drawings for the process plant. In parallel we continue to work towards project financing in order to make a production decision."

A 2015 feasibility study detailed plans for mining four deposits – Goose, Llama, Umwelt, and Umwelt Underground – to feed a 3,000-metric-ton-per-day mill forecast to produce an average of roughly 200,000 oz of gold per year over an 11.8-year mine life.

Since that time, however, Sabina has significantly expanded the resource.

Much of the expanded measured and indicated resources are expected to be upgraded to reserves upon completion of an updated feasibility study for the Goose Mine.

In the meantime, Back River crews are continuing to make progress above and underground at Back River.

Sabina's site crew and earthworks contractor have focused on upgrading roads, infrastructure, building laydown pads, and crushing and screening activities. So far, around 10,000 cubic meters of aggregate material for concrete and pond liner underlay has been mined from a nearby site.

The earthworks contractor, a Kitikmeot qualified business, is moving ahead with the rough grading of the plant site area, and pad area for permanent fuel storage tanks which will eventually be used to store fuel for the entire site.

At the same time, another crew is working on an underground decline that will provide a platform for further underground exploration at Umwelt, which hosts much of the resource at Goose. Since the first portal blast at the end of May, crews have completed 130 meters of underground development at Umwelt.

More than 25,000 tons of equipment and supplies are also being delivered to Back River via barge and ship this summer. 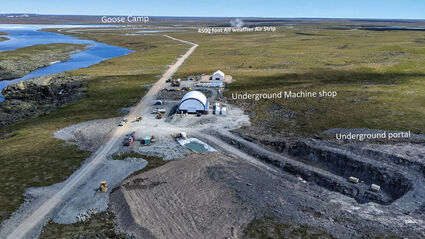 Crews have completed 130 meters of underground development since the first blast at the portal of the Umwelt exploration decline on May 31.

To facilitate the sealift, Sabina has prepared laydown storage areas and fuel tank containment at the port site with all sealift activities anticipated to be completed by the end of September.