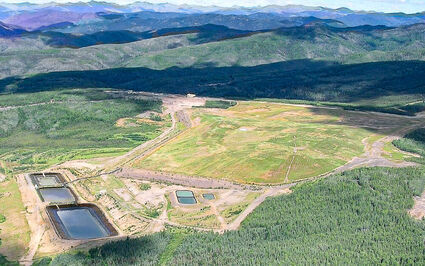 An aerial view of the Brewery Creek heap leach pad during a 2019 flyover of the past-producing gold mine in the Yukon.

With overwhelming shareholder approval, Golden Predator Mining Corp. and Arizona Gold Corp. have merged to form Sabre Gold Mines Corp., a North American junior mining company with two projects in the development pipeline that have a combined 1.1 million ounces of gold in the measured and indicated resource categories, 1.5 million oz in the inferred category, and exploration upside.

Golden Predator's primary contribution to Sabre is Brewery Creek, a former Yukon gold mine that produced roughly 280,000 oz of gold over seven years of mining that began in 1996.

As its name suggests, Arizona's primary asset is Copperstone, an open pit mine in the western reaches of the Grand Canyon state that produced roughly 500,000 oz of gold from 1987 to 1993.

"We view this as a great opportunity to bring together the advanced-stage Copperstone Mine and the Brewery Creek Mine, both former producing gold mines in superior jurisdictions, under the same umbrella to leverage a shared technical team and corporate infrastructure," said Giulio Bonifacio, who was previously the president and CEO of Arizona Gold and now serves in the same role at Sabre Gold Mines.

Aside from the fact that one is in the arid desert regions of America's Southwest and the other is found in the frigid subarctic reaches of Canada's north, Copperstone and Brewery Creek share many similarities. For example, both supported modest gold-producing operations that were cut short due to weak gold prices at the turn of the 21st century; have many of the components already in place to resume operations in today's more favorable gold price environment; and are envisioned to be reborn as low-cost heap leach operations.

Copperstone was partially revived by American Bonanza, which acquired the historical mine in 2002. This company installed a 450-ton-per-day floatation mill at the project in 2012 and produced 16,900 oz of gold from 163,000 tons of ore averaging 0.104 oz/t (approximately 3.6 grams per metric ton) gold from two underground declines developed in the bottom of the historical open pit.

As a result of the past work, Copperstone hosts more than US$110 million of the infrastructure needed to resume mining, including a fully permitted 600 t/d mill, 4,000 meters of underground development, grid power, water wells, tailings pond, assay lab, mechanics shop, offices, and other support buildings.

A 2018 prefeasibility study outlined a 40,000-oz-year gold mine at Copperstone with an after-tax net present value (5% discount) of C$25.6 million and an after-tax internal rate of return of 40.1%.

This mine is based on approximately 1.12 million metric tons of measured and indicated resources averaging 7.63 g/t (276,100 oz) gold.

A new resource estimate that includes 13,000 meters of drilling completed by Arizona, and takes into account higher gold prices, is expected to be calculated for Copperstone now that the merger is completed.

"I have long been aware of and admired the Copperstone project, from its days as an open pit mine to its current incarnation as an underground operation," said Golden Predator Mining Chair William Sheriff.

With all the permits and most of the equipment already in place, Sabre plans to begin producing gold at Copperstone during the first half of 2022.

Though not quite advanced as Copperstone, Brewery Creek has a major advantage that should allow a company with the financial wherewithal and mining know-how to rapidly advance it to production.

The major licenses needed for resuming mining at this Yukon project have been maintained, and the local First Nation supports their renewal.

Golden Predator previously submitted applications to renew the water use and quartz mining licenses for Brewery Creek, which would otherwise expire at the end of this year.

Tr'ondëk Hwëch'in First Nation has submitted letters to the Yukon Water Board and the Yukon Environmental and Socio-economic Assessment Board in support of the timely renewal of these licenses.

A Brewery Creek feasibility, which was well underway before the mid-year merger announcement, is expected to detail plans for a phased resumption of mining at this road-accessible project about 35 miles (55 kilometers) east of Dawson City, Yukon.

As currently envisioned, the initial phase of the renewed operation would involve the reprocessing of material on the heap leach pad, which hosts roughly 248,000 oz of unrecovered gold and newly mined oxide ore from areas of the Brewery Creek property already permitted for mining.

A 32-hole drill program completed last fall focused primarily on expanding and upgrading these resources ahead of the feasibility study.

A second expansion phase of the operation is expected to include potential mining of the sulfide resources and gold mineralization identified outside of the area that falls under the permits from 1990s-era mining. 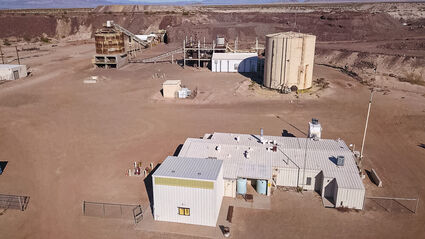 Sabre Gold's Copperstone project hosts more than US$110 million of the infrastructure needed to resume mining, including a fully permitted 600 t/d mill and assay lab.

Sabre Gold Mines is expected to begin trading on the Toronto Stock Exchange under the ticker symbol TSX:SGLD on Sept. 8.