Setbacks not expected to slow Arctic Mine 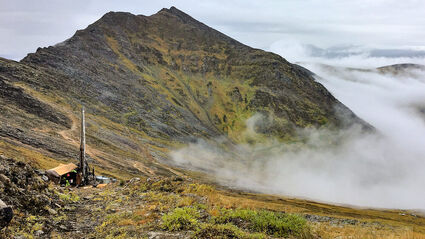 Despite weather delays and shortage of labor, Ambler Metals collected the data needed ahead of beginning the permitting process for a mine at the Arctic deposit in Northwest Alaska.

While weather delays and a shortage of workers will likely prevent Ambler Metals LLC from achieving its targeted 14,600 meters of drilling at the Upper Kobuk Mineral Projects this year, the joint venture between Trilogy Metals Inc. and South32 Ltd. said this setback will not slow the permitting and development timeline for Arctic, expected to be the first mine developed in Northwest Alaska's Ambler Mining District.

As of Aug. 28, crews had completed 4,129 meters of core drilling in 18 holes at Arctic. All the core has been logged and sampled with results expected to be announced later this year. Thus, drilling is now complete at Arctic for the season.

"We are pleased that we are able to achieve our primary objectives, which include the completion of the metallurgical drilling program at Arctic and the advancement of the pre-permitting activities for Arctic," said Trilogy Metals President and CEO Tony Giardini. "We are now well into our regional drilling program with two drills following up on targets within the Ambler Belt and the greater Bornite area."

Ambler had originally planned to carry out 7,000 meters of exploration drilling at copper-rich satellite targets within a 5,000-meter radius of the Arctic deposit; volcanogenic massive sulfide deposits similar to Arctic across the Ambler VMS Belt; and carbonate-hosted deposits like Bornite in the Cosmos Hills and the Ambler Lowlands.

After consulting with JV owners Trilogy and South32, Ambler Metals has decided to keep the UKMP camp open as long as weather will allow to complete as much of this regional drilling program as possible.

In response to the slower drilling this season, Ambler Metals also redeployed some of the geological staff to focus on regional mapping and soil sampling around satellite deposits near Arctic and at Bornite, which lies about 16 miles (26 kilometers) southwest of Arctic and is where the UKMP camp is located.

Information gathered during this season is expected to assist with future exploration activities, including identifying drill targets for the 2022 field season.

"We are looking forward to seeing the regional drilling results which should be available within the next couple of months and in commencing mine permitting once we have completed the permitting preparedness review," said Giardini. 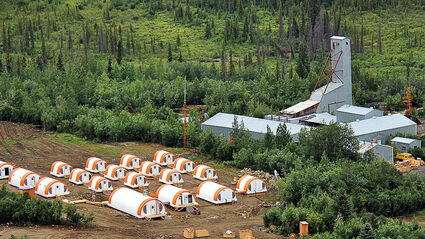 To make the most of the 2021 season, Ambler Metals intends to keep the Bornite camp open as late as weather allows.

This review is a draft third-party audit of Ambler Metals' Notice of Intent to initiate the federal permitting for a mine at Arctic. Assuming that there are no issues raised during this review, the company expects to formally submit the notice of intent to the United States Army Corps of Engineers later this year.

In parallel with the federal permitting process, which will be carried out in accordance with the National Environmental Policy Act, the company will be working with Alaska agencies for the issuance of requisite state permits.

Ambler Metals expects to file the Notice of Intent before the end of the year, and the overall permitting process to take 24 to 30 months to complete.

The mine being permitted for Arctic is anticipated to produce 1.9 billion pounds of copper, 2.3 billion lb of zinc, 388 million lb of lead, 386,000 ounces of gold, and 40.6 million oz of silver over the first 12 years of mining.