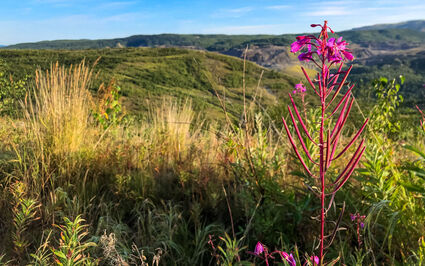 Fireweed blooms in late summer 2021 at the Poker Flats reclamated area near Healy, Alaska. The 367 acres approved by the state for phase III bond release has well-established species of native grasses, trees, and other vegetation.

Reclamation is more than a regulatory requirement for Usibelli Coal Mine Inc., a family-owned company that began restoring the natural landscape at its Interior Alaska coal mining operation before there were federal laws requiring it.

Now that there are reclamation regulations in place, mining companies must post a bond that ensures the land gets restored – either by the company that will get the money back upon successful completion or a third party that will use the bond money to finish the job.

Before Usibelli began mining coal in the Poker Flats area just outside the Interior Alaska town of Healy nearly 40 years ago, the company promised one day to restore the land to near pre-mining conditions and backed that pledge with a $2.5 million bond.

The Alaska Department of Natural Resources has verified that the reclamation at Poker Flats has been completed to standards that exceed the requirements for phase III bond release, which means the restoration has been fully completed. As such, DNR has released $411,000 of the Poker Flats phase III bond.

"In successfully achieving phase III bond release, Usibelli has demonstrated the fundamental strength of our state's mineral development system," said DNR Commissioner Corri Feige. "We can develop our land to produce resources to meet the state's energy and economic needs, then restore the land to provide healthy habitat for people and wildlife, in perpetuity. This Alaska company continues to set a great standard for responsible mining, and they deserve congratulations on achieving this important milestone."

Alaska coal mining laws and regulations establish a three-phase process for releasing reclamation bonds after mining operations have been completed. Once the mined land has been backfilled and reshaped back to roughly the original contours, the mining company is eligible to have 60% of its bond released. Another 20% is released once phase II requirements are met, which involves the establishment of vegetative cover over the reshaped land.

After waiting for around 10 years for grass, shrubs, trees, or other vegetation to become reestablished, the mine must hire an independent contractor to perform extensive inspections and recommend phase III bond release to DNR, which must then verify the contractor's work.

In a report published on Sept. 17, DNR recommended phase III bond release for 367 acres at the Poker Flats site. However, additional minor reclamation of the remaining mining acres, including removal of shops, offices, and roads, will be necessary before the rest of the land will be eligible for phase III bond release.

Russ Kirkham, a senior DNR geologist and member of the agency's reclamation inspection team, said Usibelli has worked diligently with DNR and University of Alaska officials to design an effective approach revegetating the land and returning it to nature after producing more than 25 million tons of coal over its operating life.

"Usibelli Coal Mine has worked very hard and waited patiently to achieve this recognition," Kirkham said. "For this bond release, they met the requirements of very stringent state oversight for the permit, and the results of their work went beyond what was required."

This is not a surprise for a company owned by a family that has called this area home for more than 75 years and has pioneered mine restoration in Alaska.

Usibelli begins reclamation before it ever starts mining – taking inventory of the variety and abundance of natural vegetation found in the proposed mining area and the conditions necessary for its growth.

When mining is done, and the land recontoured, the company seeds the area with a carefully researched mixture of grasses and several plants indigenous to northern regions. Since 1970, the mine has reclaimed more than 5,500 acres and planted more than 500,000 seedlings. Over a period of years, native Alaskan vegetation invades the area, returning the mined land to its natural appearance.

Many species of Alaskan wildlife, such as Dall sheep, moose, and caribou, feed on revegetated areas throughout the mine where heavy equipment once operated.

The abundance of wildlife on Usibelli reclaimed lands is something DNR inspectors are all too familiar with. 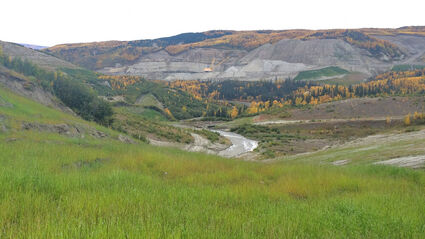 "They did a real good job at reclaiming this land," said Kirkham. "Now, DNR inspectors won't go into the area without carrying bear spray. There's lots of good browse and habitat that attracts moose, bears and other wildlife – pretty soon you'd be hard-pressed to tell there ever was mining here."

The Poker Flats area is only the second mining area in Alaska to achieve phase III bond release. The first was the Gold Run Pass coal mine, another Usibelli operation.