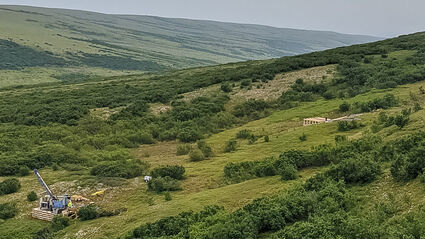 The 2021 drill program at Graphite Creek focused on gathering data for a feasibility study on developing a mine at this world-class deposit in western Alaska.

Graphite One Inc. Oct. 13 announced the completion of a 2,052-meter drill program focused on gathering data for a feasibility study on developing a mine at its Graphite Creek project about 35 miles north of Nome, Alaska.

A preliminary economic assessment completed in 2017 outlined plans for a mine at Graphite Creek that would produce roughly 60,000 metric tons of 95% graphite concentrate per year and a separate processing facility to refine these annual concentrates into 41,850 metric tons of the coated spherical graphite used in the lithium-ion batteries powering electric vehicles and storing renewable energy, plus 13,500 metric tons of purified graphite powders annually.

The resource estimate for Graphite Creek has been expanded and upgraded since the completion of this PEA.

The 2021 field program at Graphite Creek included infill and step-out drilling to upgrade and expand this resource. Though assays are pending, the company reports that these holes cut obvious graphitic mineralization over wide intervals typical for the deposit.

"We are very pleased with the successful execution of the 2021 field program, as historical drilling coupled with the new data clearly demonstrates the predictability and consistency of high-grade, near-surface graphite," said Graphite One President and CEO Anthony Huston.

In addition, five sonic holes were drilled to collect detailed geotechnical data needed for the planned dry tailings and waste rock storage area at the project.

At the same time, a preliminary feasibility study for a mine at Graphite Creek and a separate processing facility is underway and is expected to be completed before the end of the year. 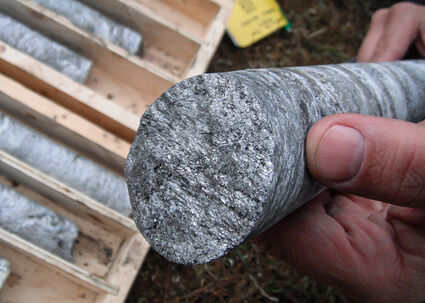 "With the recent CDN $21 million in funding, our efforts have progressed towards completion of the PFS for the largest known and highest-grade graphite deposit in the United States," said Huston. "With the concepts and conclusions outlined in the PEA suggesting a 40-year mine life, the Graphite Creek deposit continues to show potential to be an essential long-life component of the graphite supply chain, one of four critical minerals that are on the U.S. National Defense stockpile list."

Further information on the U.S. Department of Defense's plans to begin stockpiling graphite can be read at Pentagon adds graphite to stockpile list in the October 8, 2021 edition of North of 60 Mining News.

"While the PEA demonstrated the project's economic viability, we expect these further studies with their optimized plans for the mine and processing facilities to support improved economics," Huston added.