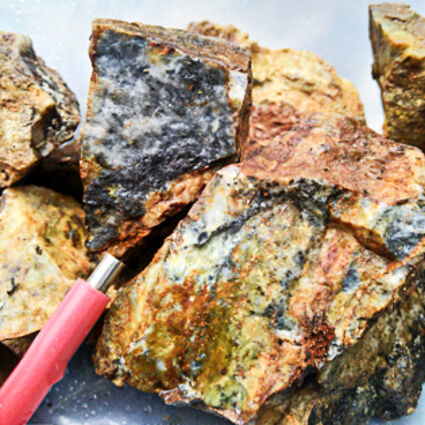 Rock samples collected during mapping and prospecting of this underexplored western area of the Tibbs project returned grades as high as 190.4 grams per metric ton gold, the first evidence of Pogo-style vein mineralization in the gneissic terrain at Tibbs.

The sample was collected about 3,500 meters north of the Gray Lead vein, where one hole drilled during the initial phase of 2021 drilling at Tibbs cut 5.15 meters averaging 12.45 g/t gold, indicating the presence of a larger hydrothermal system than previously known.

Collected from a prominent northwest-trending electromagnetic geophysical lineament, Tectonic says these samples provide additional validation of its exploration model of controlling structures coinciding with both soil and rock gold anomalies, which share the same geochemistry and host rocks as the mineralization observed at Pogo.

This structural and geological setting is similar to that found at the Liese zones at Pogo, flat-lying structures that have provided the bulk of the ore at Northern Star's underground gold mine, according to the company.

"With the recognition of Pogo-style veining in the western gneissic rocks, Tibbs now exhibits all the key features of the Pogo geological model, with important evidence for the mineralizing fluid having passed through controlling high and low-angle structures within favorable host rocks," said Tectonic Metals President and CEO Tony Reda.

After geologists identified Pogo-style in the rock sample collected from West Trench, RC hole TBRC21-006 was drilled from about 80 meters west of the sample location to test for either a high- or low-angle orientation to the vein mineralization.

"Through rock grab sampling, Tectonic has, for the first time, confirmed the presence of high-grade, quartz-sulfide vein mineralization in the gneissic-hosted, western half of Tibbs at our West Trench target," said Reda. "We immediately recognized the importance of this development and followed up our discovery with drilling during our phase II program."

Assay results are pending for 4,215 meters of core and RC drilling completed in 23 holes that tested six targets during the phase II 2021 program at Tibbs.