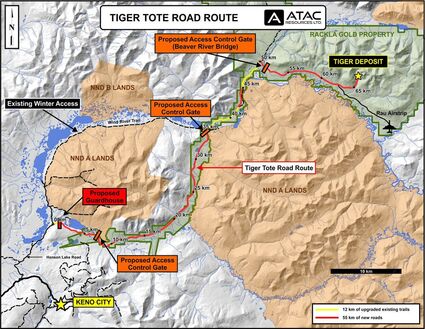 Late in 2020, ATAC was notified that the Yukon government had rejected its application to construct a tote road to the Rau project at the east end of its Rackla Gold property.

President and CEO of ATAC Resources Ltd. Graham Downs recently issued a letter to shareholders that reviews the company's portfolio of mineral exploration projects and outlines plans for 2022, including its goals for its flagship property, the Rackla Gold property in the Yukon.

"The last two years have provided obvious challenges. However, during this time we have been very active advancing our copper-gold projects and conducting numerous comprehensive property evaluations, while preserving our treasury for the opportunities that lie before us now," Downs penned in the letter.

After being denied the permitting to construct a 65-kilometer (40 miles) private tote road that would have supported the advanced exploration and potential mine development at Rau – the westernmost of three projects that make up ATAC's expansive Rackla Gold property – the company shifted its focus on the East Goldfield project in Nevada, a departure from more than a decade of primarily exploring its district-scale asset in the Yukon.

However, a prospect such as Rackla is not so easily thrown away; as reported by the company, it plans to focus on Nadaleen, host to famous Carlin-style gold targets, which includes 1.7 million ounces in the nearby Osiris deposit located within Nadaleen.

"We will be resuming work at the Rackla Gold property, our flagship asset for over a decade," Downs wrote. "We have defined high grade resources at both the Tiger and Osiris deposits, with a total mineral inventory of approximately 2.3 million ounces of gold."

In early 2020, ATAC published results from an updated preliminary economic assessment (PEA) for Osiris, a Carlin-type gold deposit that is the most prospective in the easternmost part of Rackla and hosts 12.4 million metric tons of inferred resource averaging 4.23 grams per metric ton (1,685,000 ounces) gold.

"Today we are well positioned to aggressively move forward and take advantage of the strengthening commodity cycle, with significant exposure to both copper and gold," the ATAC CEO continued in his letter. "During the past year we have grown our pipeline of gold and copper projects in the Yukon, extended our reach into neighboring B.C., and drill tested a project in Nevada, one of the world's safest gold mining districts. We have diversified our portfolio both geographically and into the critical metals space."

ATAC's focus for Rackla will be on Nadaleen, with approximately 2,000 meters of targeted diamond drilling planned to expand on the already known resources and work toward initial economic evaluation.

"Our projects now include the Rackla Gold property, the Connaught property, the new Catch property option in Yukon, and the recently acquired option on the PIL property in north-central B.C.," added Downs.

Results from most of the 2021 work done at Connaught – a road-accessible silver property about 65 kilometers (40 miles) west of Dawson City and 10 kilometers (six miles) east of the Alaska-Yukon border – have shown very significant porphyry potential in four target areas, with extensive copper and molybdenum mineralization identified in soil, rock, and trench samples.

In response to these findings, ATAC has secured a contract for a 5,000-meter maiden reverse circulation drill program to test two of the distinct porphyry targets identified last year. Additionally, the company will continue with its trenching, soil sampling and mapping across the property.

Located in an underexplored part of southcentral Yukon, roughly 56 kilometers (35 miles) southeast of Carmacks and accessible by floatplane – according to the company, the area has not seen any previously documented exploration work.

Therefore, as a truly grassroots discovery, ATAC plans to conduct a systematic evaluation of the gold-copper targets that have yielded rock grab samples with 52.4 g/t gold and 0.12% copper and 4.4 g/t gold and 0.88% copper.

Finally, located in the heart of the Toodoggone Mining District, the recent PIL property acquisition has led to ATAC finally breaking into the B.C. mining field. While PIL has seen limited work over the last decade, the 151.5-square-kilometer (58.5 square miles) copper-gold-silver property has become an exciting prospect for ATAC.

With some cursory work done, highlights from the property included a grab sample that returned 489.71 g/t gold with 6,514 g/t silver from a brecciated bedrock source.

This year's program for PIL involves 20,000 kilometers (12,427 miles) of induced polarization surveying for phase 1, and then a diamond drill program for phase 2, as well as to evaluate the undrilled 1,300- by 750-meter Copper Ridge anomaly. 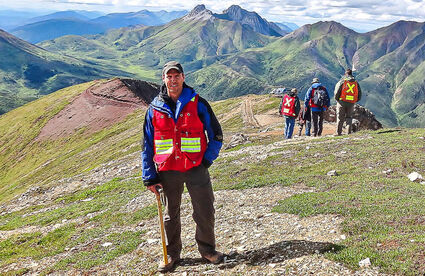 Adding two new properties less than a month apart has given ATAC quite the momentum and plenty of options. While the company stated it would no longer pursue the East Goldfield option in Nevada, it has no plans to remove itself from the area, as it allows the company to balance seasonality of work in the Yukon and northern B.C. and provide year-round news flows.

"With our new properties in hand, as well as the resumption of exploration work in the eastern portion of Rackla, this year will provide you, our shareholders, with discovery exposure across a full project pipeline – from grassroots through resource delineation," Downs said in his shareholder statement. "In particular, drill programs will be undertaken at Rackla, where we will be targeting expansion of high-grade Carlin-style resources, and Connaught, where we will be targeting porphyry copper potential for the first time."