KSM to connect to BC Hydro power grid 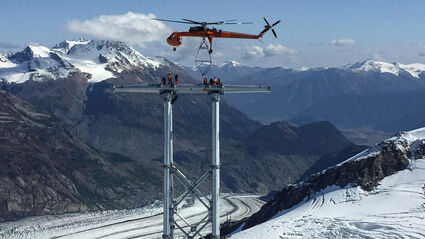 Crews install a transmission line connecting the Brucejack gold mine a few miles southeast of the KSM copper-gold-silver mine project to BC Hydro's Northwest Transmission Line.

Under this agreement, KSM will connect to BC Hydro's existing Northwest Transmission Line at a switching station located where KSM's Treaty Creek access road meets Highway 37.

KSM Mining has already completed the design for a 30-kilometer (19 miles) transmission line that will connect the future KSM plant site to the station. Construction is scheduled to begin next year, and this transmission line is expected to be completed during 2024.

Previous studies at KSM incorporated diesel power for construction activities, with BC Hydro power to be supplied later for operations.

"We are delighted to take our relationship with BC Hydro to the next level," said Seabridge Gold Chairman and CEO Rudi Fronk. "Having access to low-cost hydro power is one of many logistical advantages KSM enjoys compared to other large undeveloped gold and copper projects around the world."

In addition, Seabridge says connecting to the Northwest Transmission Line earlier than previously planned offers several significant ESG and economic advantages, including the reduction of greenhouse gas emissions during the multi-year construction phase; 25% lower power costs during construction; moving the BC Hydro connection forward further de-risks the mine project; and the connection is part of Seabridge's work towards gaining "substantially started" status at KSM.

The cost of the new BC Hydro switching station consists of $28.9 million in cash payments for facilities directly required by the KSM project and $54.2 million in security for BC Hydro system reinforcement to make the power available for the large mine project. The system reinforcement security will be forgiven annually, typically over a period of less than eight years, based on project power consumption.

Last week, Seabridge announced a US$225 million funding from Sprott Resource Streaming and Royalty Corp. and Ontario Teachers' Pension Plan provides the capital necessary for its work with BC Hydro as well as our other substantially started activities.

For more information on the funding and details of the substantially started stats can be read at Seabridge secures $225 million for KSM in the current edition of North of 60 Mining News.