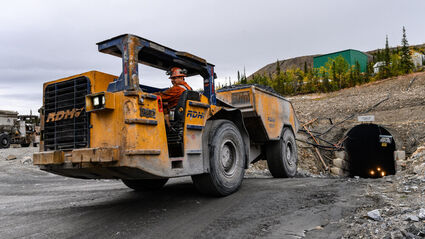 With multiple ore faces in two mines operating – Bermingham and Flame & Moth – it is anticipated that ore deliveries in the second quarter 2022 will improve significantly, which should result in a bolstered increase to production levels.

Alexco Resource Corp. March 21 announced an update on the scale-up of mining operations at its Keno Hill project in the Yukon, as well as the anticipated mining and exploration activities for 2022.

Based on these reserves, the Keno Hill mine is forecast to produce more than 35.5 million oz of silver over the next eight years, or nearly 4.5 million oz per year.

This comes after a January announcement of its Bermingham deposit hosting 47.2 million oz of silver alone, making it one of the largest deposits in the Keno District, and according to Alexco, with a potential to grow even further.

Regardless of the exciting start to the year, the company has faced many challenges – mainly due to the COVID-19 pandemic.

"Our recent progress on ramp-up of production has certainly not been up to our expectations," said Alexco Resource CEO Clynton Nauman. "But considering the environment we have been operating in, and the challenges our team has overcome to get us to this point, I am excited for what the next few months will look like."

While activities at Keno Hill in early 2022 were impacted by the occurrence of numerous COVID-19 cases on-site, the addition of supply chain interruptions had a negative impact on maintenance activities as well, reducing the overall availability of key underground equipment.

This, in turn, reduced development rates, ore extraction, and ultimately silver production in the early months, with Bermingham and Flame & Moth producing a combined 4,454 metric tons through February 2022.

"The early part of 2022 was a very challenging time for us at site, primarily due to a significant reduction in our available workforce from COVID isolation requirements following routine testing and equipment availability issues resulting in a considerable reduction in productivity," added Nauman. "I believe much of that is behind us now, and we are close to finally achieving what we have been working towards for the past 18 months."

Due to the setbacks, the company now estimates that the first-quarter silver production will be approximately between 75,000 to 100,000 oz with a vast majority of that production occurring in March.

Nonetheless, Alexco feels confident to make up lost time with the mill now demonstrating that it is more than capable of operating at, and even above, its design capacity of 400 tpd, given the delivery of ore from underground has no more delays.

"We are in the ore at both of our new mines, our capital improvements at the mill and across the district have been completed, and our silver production is just now starting to ramp up," continued Nauman. "In 2022 we will also be undertaking a 15,000-meter surface drilling program focused on identifying and testing new prospective areas adjacent to the Bermingham deposit, especially areas projected to contain structural characteristics and architecture similar [to] our discovery at Bermingham."

The company says longhole ore extraction has continued at the Bermingham 1150 level, and this month, the company reached the ore at both the 815 and 835 levels for Flame & Moth. 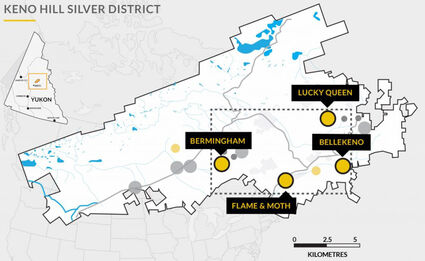 With multiple ore faces in two mines operating, it is anticipated that ore deliveries in the second quarter will improve significantly, which should result in a bolstered increase to production levels.

"As I have said numerous times before, we still have work ahead of us at Keno Hill, but I am optimistic now that we can see the finish line and that we will reach our objective of reaching cash flow self-sufficiency, and operating a safe, sustainable, and profitable operation in the second half of this year," finished Nauman.

While the company feels risks to this outlook remain elevated, Alexco estimates that next quarter's silver production will range somewhere between 450,000 to 500,000 oz before targeting an increase to effective "run-rate" levels in the second half of the year.