Will not make further investments as it negotiates with buyer North of 60 Mining News – April 1, 2022 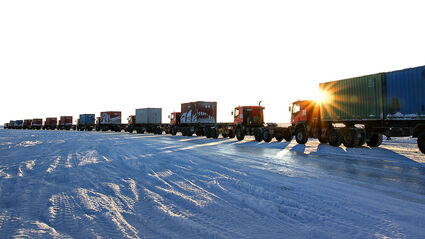 Trucks deliver supplies over a winter road to Kinross' Kupol gold mine in the Chukotka region of Russia's Far East.

Kinross Gold Corp. March 29 announced plans to divest all its Russian assets, including its Kupol gold mine.

Citing concerns about the destruction and loss of life being caused by Russia's invasion of Ukraine, the gold mining company announced in early March that it had decided to suspend all activities at its gold projects in the Russian Far East.

Kinross' Kupol Mine in the Chukotka region of...